It’s that magical time of year again when nothing can be heard apart from the deafening and infinite orchestra of ambulance sirens as the entire city becomes illuminated by flashing blue lights like some sort of particularly shit rave. The streets are chock-a-block with pikees launching fireworks into traffic whilst ambulances dart from place-to-place carrying screaming idiots whose faces now resemble a plate of Spaghetti Bolognese that’s been prepared by someone who has a pair of Black and Decker Orbital Sanders instead of hands. It’s like living in Basra, except it’s fucking freezing so it’s even worse.
Bonfire night is one of the shittest days of the year, particularly if you’re an animal or someone who doesn’t like being on fire. Here are a few things you can do to avoid being an enormous cunt.

1 – Always check (poke/prod/etc) the bonfire before lighting the bastard.

It can be very, very funny when an animal catches fire, no one is denying that, but sometimes, when the animal in question is a bit of laugh (or particularly tasty), it can just be a bit of a waste.
I used to know a hedgehog called Lawrence Fleece who lived in a big pile of leaves and twigs at the bottom of Ian Botham’s garden. Last bonfire night Beefy set the entire heap on fire without taking a couple of minutes to check if it was someone’s house and Lawrence was burnt to death.
To start with everyone was pretty bummed out because Lawrence was quite a nice lad (despite the fact that he quite often wore a ‘Black Eyed Peas’ T-shirt). It later transpired, however, that Lawrence had been noncing up kids so everyone stopped giving a shit and now everyone thinks that old Beefy is a right proper legend.

2 – Check your sparkler has been fully extinguished before you lob it in the bush.

Sparklers can reach 2000 ºC, which is five times hotter than boiling cooking oil. Amusing when a young child burns their hand on it, sure, but not so funny when you end up like a fox I used to know called Glen Cake.
Three years ago, me and my mate Glen were wandering up the canal when we found a sparkler in the undergrowth. Glen thought it would be quite funny to put it in his mouth and pretend he was smoking one of those fancy cigarettes that posh people smoke in poncey holders (he was already wearing a top hat and had a monocle – I forget why). Anyway, the sparkler must have only just been discarded because as soon as he put it in his gob his head caught fire and blew up. One of his eyes flew across the canal and smashed a window on a barge. I licked his brain and it gave me a little electric shock on my tongue. It was a really weird night.

This rule shouldn’t just apply to bonfire night. Lock them up in a dark room and throw away the bloody key. I hate cats and dogs. 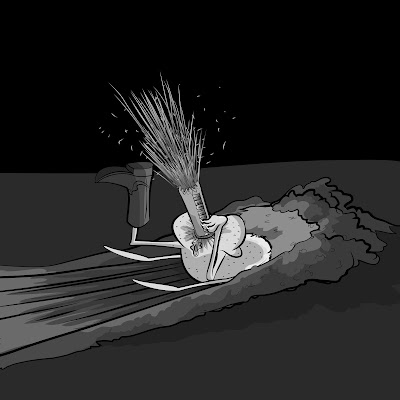 4 – Don’t launch fireworks out of your bum

This is sort of one of those rules that’s made to be broken because if you can pull it off then it’s truly magnificent. However, if you’re not large enough then the shear force of the firework can prove to be a bit of a problem. My mate Sexy Chris (an owl) once tried to fire a  ‘Neutron 5000 Power Rocket’ out of his arsehole but he wasn’t holding on to anything and he ended up being dragged into the sky by the rocket where it blew all his feathers off and ruptured most of his internal organs. The whole thing really messed him up because now he can see sounds, hear colours and sometimes he lays a little egg out of his penis that’s full of salt. He’s really poorly.

NB. This stunt can also go wrong if you insert the firework the wrong way round. I once saw a donkey make this mistake. Some people will tell you that it wasn’t the donkey’s idea and that I put it up there and knew exactly what I was doing. I tell those people to keep their bloody noses out. The donkey’s dead now anyway so it doesn’t even matter.

5 – Never return to a firework that’s already been lit.

Obviously don’t ever return to a firework that’s already been lit unless you want to end up looking like a fried breakfast that’s been served on Pete Burns’ head. It is however very amusing to advise other people to do the opposite. I once convinced a hen to go and reignite the fuse of a Roman Candle and I couldn’t have timed it better because as soon as the prick bent down to relight the bastard the bloody thing went off and set him on fire. He ended up running into the middle of a motorway and causing a pile up. I laughed so hard that I gave myself a hernia and accidentally did a little poo. That was the best bonfire night ever.