If you’re the kind of person who spent all Christmas sat on your own in front of the TV with a loaded gun on your lap, trying to pluck up the courage to blast your own brains out, with even the Miranda Christmas Special failing to tip you over the edge then GREAT NEWS! The most depressing day of the year is just round the corner to give you the inspiration you need to splatter yourself into oblivion. Januray the 23rd is the day. See you there.
Traditionally, by the time that the third Monday of January rolls round, everyone’s fully immersed in that post-holiday comedown, blinking back tears as they stare up into a grey sky trying to remember the official name for that big orange ball that used to hang in the sky. Outside it’s colder than a whore’s heart, no one has a penny to their name and this year – as a special treat- everyone will be sweating and weeping on the toilet thanks to the norovirus. The only thing to look forward to is the sweet, sweet kiss of death.
To compound the misery, many people think that now’s a great time to stop drinking which will usually result in them feeling sh*t because they’re either struggling with abstinence or feeling guilty because they f*cked it up after about three days for absolutely no reason other than a lack of will power, usually reserved for homeless meth addicts. 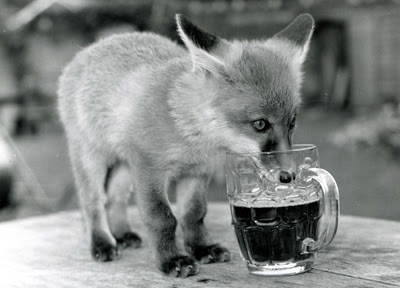 This year however, I’m showing some restraint. This year I’m joining in and attempting a dry January, and as a fox who likes nothing more than gin and MCAT it’s a f*cking massive challenge let me tell you.
A couple of weeks ago I was chatting with my mate Sexy Chris (an owl) and he told me that I looked like I was going to die based on the fact that most of my hair had fallen out and I was lactating blood. I decided to sort my life out. See if I can’t squeeze another few months out of my wretched existence.
I started by swapping gin and Castrol GTX for water. Because I’m not a poof I haven’t had a drink of water for about 3 years. It’s disgusting, particularly the water available to me in Regents Canal, which is usually full of crap thanks to all the sh*t you lot hurl into it - the other day I almost choked to death on a pair of Ghostbusters underpants. I’ve also been drinking a lot of Um Bongo.
One of the other problems with going dry is going out. If you’re anything like me then a typical night out will involve getting leathered in a tunnel before wandering up the canal and finding a few swans to have sex with. Since I’ve been sober I just can’t seem to get the same kind of kick out of activities like this and all I ever want to do is stay at home in my filthy pit and read. At the moment I’m reading an autobiography by a wasp called Ian Hedge. It’s absolutely crap. Definitely not a page-turner. I’m basically bored to tears and, when you’re bored, it’s hard to stick to the programme. It’s tough.
It’s also difficult to find support from your mates through all the bravado that goes along with the drinking culture that dominates our society. The other day I was over at my mate Cwis Packham’s bungalow and I told him I was off the sauce. Typically Packham started acting the giddy goat and calling me a bender. The evening ended with him pouring an entire bottle of red wine over my back before shoving the bottle up my a*se which is the sort of thing I could really do without at the moment, to be honest.
Ultimately is it really worth the hassle? As soon as it’s February the 1st all of us abstainers will go out and drink so much that we’re vomiting out of our eye sockets and our health will plummet back to appalling new lows. Makes you wonder what the point is. It’s depressing.
http://www.shortlist.com/cool-stuff/dry-january
Email ThisBlogThis!Share to TwitterShare to FacebookShare to Pinterest
Newer Post Older Post Home