SOME OF MY FAVOURITE MAGAZINES 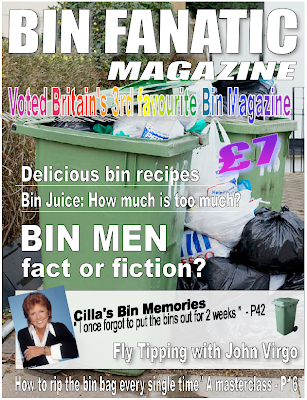 BIN FANATIC
Released: Monthly
Regular Features: It's got a regular feature called 'Bin Memories' where celebrities tell their favourite bin related stories. Last week Anne Robinson told a fascinating anecdote about the time she found a dead pheasant behind a bottle bank.
It also has a weekly column about pedal action kitchen bins written by David Mitchell and often comes with pull out posters (last month's issue came with a picture of the new 120 litre Sulo wheelie bin. Exciting)

OWL FETISH
Released: Daily
Regular Features: Basically just lots of sexy pictures of owls wearing leather trousers. I bought it today and there's a picture of a Mottled Hawk Owl sucking his own penis in wheelbarrow. Doesn't get much better than that. There's also a cryptic crossword and a quiz about famous owls who work in the sex industry.

FAMILY BATTLE SWAN
Released: Weekly
Regular Features: Features all the latest helmets and weapons so that you can keep your Battle Swan fighting fit. Also features a Q&A and masterclass. This week how to teach your Family Battle Swan the art of jujitsu. Each edition comes with a collectible sticker of famous Battle Swans from history including Gavin 'The Neck' Pelmet and Terry 'The Shithead' Reeves.

FROG WORSHIPPER
Released: Week days
Regular Features: The magazine for anyone who believes that a frog created the world and rules it from a space-station on the other side of the solar system.
Mostly hymns. 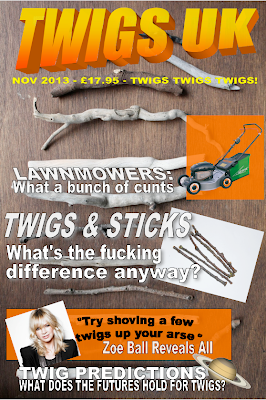