FOX NEWS:
THE
PRINCE OF
DARKNESS!
GEORGE'S TEACHERS WORRY THAT HE'S ALREADY AN EXPERT IN THE DARK ARTS 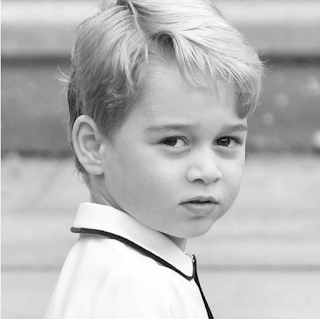 Prince George has started his school career at elite London prep school Thomas’s in Battersea, but within the first couple of months some of his teachers have noticed peculiar behaviour from the third in line to the throne, including black magic, witchcraft and necromancy.
Reports have been leaked about the pint-sized royal engaging in bizarre and paranormal antics whilst attending the exclusive establishment which boasts a ballet room, rooftop playground and pottery studio and costs onwards and upwards of £19’000 a year.
“For the first month or two I just thought they were silly rumours” said head of nursery, Miss Caroline Tixylix, “but just a few weeks ago I could swear that I saw George levitate for a couple of seconds in the playground whilst he was playing kiss chase with Anastasia Persephone Ogilvy III and Lady Seraphina Gwendolyn Armstrong-Jones of Kent” (both 5).
Music teacher, Ms Bijou Hatchwork made an even bolder claim when she reported that she’d seen the heir to the throne scramble across the ceiling after painting a pentagram on the wall in blood. “I watched him scrawl some sort of satanic rune into the wall of the modern languages department using the decapitated remains of the school hamster, Mr Bongo” said Ms Hatchwork “and then he just looked up at me and hissed before scurrying up the lockers and across the ceiling like some sort of vampiric rat” she continued. “I used to think he was kind of cute, but now I’m ashamed to say that I give him a wide birth, he gives me the willies”.
The deputy headmistresses of the school has also noticed malevolent behaviour from the Prince. Mrs Frangipane Bagshot has said that just days ago she saw the Queen’s great- grandson in the library chanting ancient Mesopatanian incantations and invoking the spirits of Sumerian Gods of the underworld. “I couldn’t believe what I was watching” said Mrs Bagshot “When you take on a job as a primary school teacher you don’t expect to have to deal with children using ritualistic magic to summon up the ghosts of Babylon deities. They usually wait until they go to Eton before they start doing that sort of thing”.


Last Thursday at the school, dinner lady Ena Todd was found hanging in the woods above a Wiccan alter constructed using sheets, curtains and artefacts from Prince George’s bedroom in Kensington Palace. The Metropolitan Police are treating the case as death by misadventure.
Email ThisBlogThis!Share to TwitterShare to FacebookShare to Pinterest
Newer Post Older Post Home