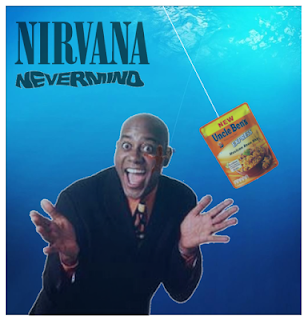 NIRVANA - NEVERMIND
The Nevermind album cover shows a circumcised baby boy, alone underwater with a US dollar bill on a fishhook just out of his reach. According to Kurt Cobain, he conceived the idea while watching a television program on water births withth drummer Dave Grohl. Cobain mentioned it to Geffen's art director Robert Fisher. Fisher found some stock footage of underwater births but they were too graphic for the record company so he mocked up an alternative version featuring Ainsley Harriott reaching out to grab a bag of Uncle Ben's Express Egg Fried Rice. Cobain apparently liked it but argued with the record company in favour of his original idea.
After the record's release Cobain instantly regretted his decision and committed suicide three years later. 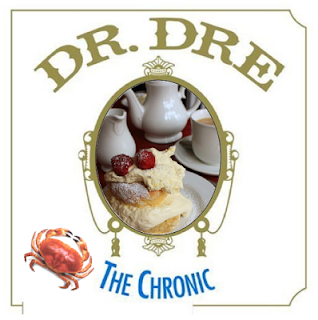 DR. DRE - THE CHRONIC
In 1992 Dr. Dre came to the UK on holiday with his nanna. All of his mates had told him that he needed to go and check out the emerging hip hop scene in Brixton but Dre fucked up and found himself staying in the delightful seaside town of Brixham in South Devon.
Dre described the holiday as the "best time of his life", citing his trip to see the replica of Frances Drake' s ship, The Golden Hind, as a particular highlight. Dr. Dre also became addicted to Devon Cream Teas and apparently put on a whopping 4 stone during his two week visit. Dre insisted on putting a photograph that his nanna had taken of a "particularly fucking tasty" cream tea on the sleeve of his new album 'The Chronic'. The front cover also featured a picture of 'Pinchy Stephen', a crab that Dr. Dre had "fallen in love with" on a day trip to Torquay.
When Dre returned to Los Angeles he decided to remove the homage to the West Country from the album's artwork. 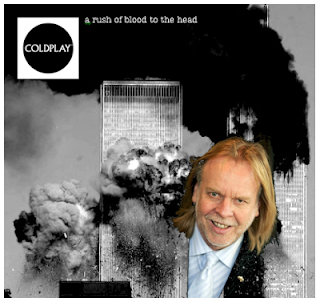 COLDPLAY - A RUSH OF BLOOD TO THE HEAD
Coldplay's bizarre idea for their 2002 album 'A Rush Of Blood To The Head', originally featured an image of Rick Wakeman, keyboard player from progressive rock band YES, leaning out from between the Twin Towers as they billowed with flames during the 9/11 terrorist attacks. The artwork was banned before it hit the shelves.
When asked why the band had decided to pursue such a controversial and out-of-character concept for their packaging, lead singer, Chris Martin claimed that he had no idea that the September 11th attacks were real and that the previous year's news coverage of the event had just "sort of passed him by" - "I didn't really watch much TV in 2001 because I was learning how to play the piano". THE SMITHS - THE QUEEN IS DEAD
During the recording of 'The Queen Is Dead', lead singer, Morissey, was suffering from terrible 'night terrors' about a lawnmower with human arms. Morrissey became obsessed and insisted that the petrol powered demon make an appearance on the front cover of their new record. Morrissey started writing books about the beast and even spent several months hunting for it in Shenandoah National Park. Guitarist, Johnny Marr, claims that this new fascination with the lawnmower was the beginning of the end for The Smiths and even claimed that Morrissey had started writing a 'rock opera' about the four wheeled mutant.
The artwork was eventually changed behind Morrissey's back, causing further friction between the band members. 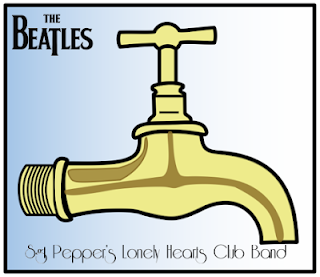 THE BEATLES - SGT PEPPER'S LONELY HEARTS CLUB BAND
Design agency 'Walters and Dean' were offered the job of designing The Beatle's eagerly anticipated, eighth, studio album in 1967 but left it to the last minute , panicked and submitted a low res jpeg of a clipart tap. Producer, George Martin was said to be furious and allegedly had Walters and Dean assassinated.
The Grammy Award-winning album packaging was eventually art-directed by Robert Fraser and designed by Peter Blake. 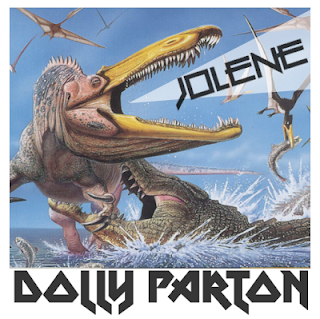 DOLLY PARTON - JOLENE
Art director, Gavin Slice was given the job of designing the artwork for Dolly Parton's single 'Jolene' ,and, due to a communications error with the record label, thought that 'Dolly Parton' was a heavy metal band, despite the fact that heavy metal didn't even really exist as a genre for another 6 years.
His concept for the single's artwork featured an alligator fighting some kind of prehistoric pig/eagle surrounded by pterodactyls fishing for trouts. The typeface, designed by Slice, is now synonymous with British heavy metal outfit, Iron Maiden, despite originally being created for Parton. Not a lot of people know that.
Despite the fact that the artwork was never used, Dolly Parton herself thought that it was so "fucking awesome" that she had it tattooed onto her back, replacing the word 'Jolene' with the word ' M E G A C U N T ' 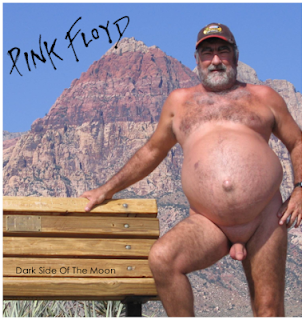 PINK FLOYD - DARK SIDE OF THE MOON
It's difficult to imagine Pink Floyd's seminal masterpiece 'Dark Side Of The Moon' being quite so iconic if the original artwork had been chosen over Storm Thorgerson's evocative prism design.
This piece, depicting a fat nudist with his dick out in front of a mountain, however, was the brainchild of frontman, David Gilmour who claimed - "this is what I had in mind when I was writing the album".
Gilmour was said to be bitterly disappointed with the final design and still believes the album would have sold even more copies if he hadn't been overruled by the rest of the band.
Gilmour refuses to have any copies of the official version in his house, only acknowledging this as the official packaging for the album. 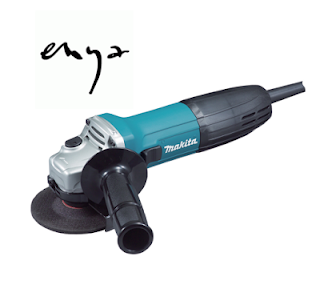 ENYA - WATERMARK
Enya insisted on featuring a Bosch GSS23 AE Orbital Sander on the front cover of her sophomore album, Watermark, but was eventually talked out of it by her management who feared that it wasn't in keeping with her image. She eventually managed to talk them round into producing a limited edition, Japanese pressing, of 'Orinoco Flow' featuring a Makita GA4530 115mm Angle Grinder.
These copies can be worth a lot of money. 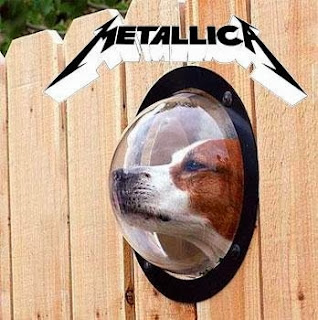 METALLICA - THE BLACK ALBUM
"The Black Album' is not only one of Metallica's finest records, it's without doubt one of the greatest records of the heavy metal genre. The album's artwork had to do this epic, leviathan of a recording justice, and Drummer, Lars Ulrich has stated that the band had much discussion on what direction to take the front cover
Apparently lead singer, James Hetfield insisted, for several weeks, that he wanted the packaging to depict a beagle looking through some sort of perspex dome in the side of a fence. At one point he actually talked the entire band round and the sleeve was sent off to the printers. It was halted the following day due to guitarist, Kirk Hammett's "reservations" and the band eventually opted for a cover featuring the band's logo, angled against the upper left corner, and a coiled snake (derived from the Gadsden flag) on the bottom right corner. All in black.
Email ThisBlogThis!Share to TwitterShare to FacebookShare to Pinterest
Newer Post Older Post Home