TAURUS
You've lots of good and bad influences around you this week so it's best to distance yourself from friends who drag you down. Also your wife will probably leave you this week after she finds you having sex with the toilet.

GEMINI
Jupiter is aligning with Pluto this week which means it's going to be a time of contrasts and contradictions. On the plus side you'll meet an old friend who will pay you a nice compliment about your new haircut but on the bad side you'll finally be arrested for murdering all those children in the late 90's.

LEO
This week you accidentally get the IKEA logo tattooed onto your forehead. Try and use it to your advantage by contacting their PR team and squeezing some money out of the cunts. Unfortunately this has repercussions on that job interview you went for. Try and keep your chin up as there's a very good chance that local bin depot will hire you when the swelling goes down

VIRGO
This week you will be briefly transformed into a Demi-god and you will sit at the right hand side of Christ as you govern the entire solar system from your throne at the edge of the universe until you unfortunately shit yourself and are shamefully restored back to your human form. Try not let it get you down because this weekend sees you getting a hand job off that lady in the wheelchair who hangs about outside the launderette showing her vagina to dogs.

LIBRA
Your legs go all black and red and when you go to the doctors they just look really scared and sort of confused. (One of them is sick in a bin)

SCORPIO
There's no point crying over spilt milk. Imagine if you did. You're having breakfast with Poppy and you spill the milk and start crying like a bitch. She's already pissed off with you because you haven't got a job and she came home last night and found you wanking yourself silly in front Deal or Deal. It's time to man up and take the bull by the horns otherwise she's defo going to leave you for Geoff and apparently his dick is absolutely fucking massive.

SAGITTARIUS
Spontaneity can be a good thing but remember to follow your heart and your head. Shouting a bunch of crazy shit about Jews might seem funny after shit loads of Kestrel Super Strength but you won't be laughing so hard when you get hospitalised outside a synagogue. You've only got yourself to blame. it's time to start taking responsibility for your own actions. (You also might buy a cat)

CAPRICORN
A friend dares you to swallow 400 eggs. I wouldn't bother. You'll either die or just feel like shit. Complete waste of time. Why are you even thinking about it. So pointless.

PISCES
It's time to knuckle down and make some serious decisions. Your power planets Mars, Jupiter and KC8976 are going to form a perfect equilateral triangle this weekend and, Yes, you should kill yourself behind Greggs the bakers.

ARIES
A spot of romance puts a spring in your step and you fall in love with your Hoover. Not everyone will come to our weird wedding but stick to guns and one day your friends will come round and stop trying to get you sectioned. True happiness only ever comes to the brave and stoic. Good luck to you. 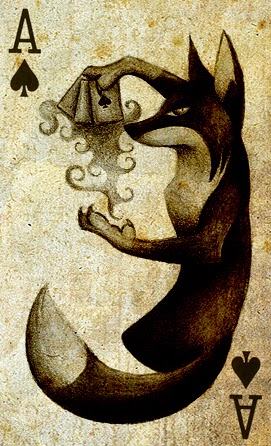 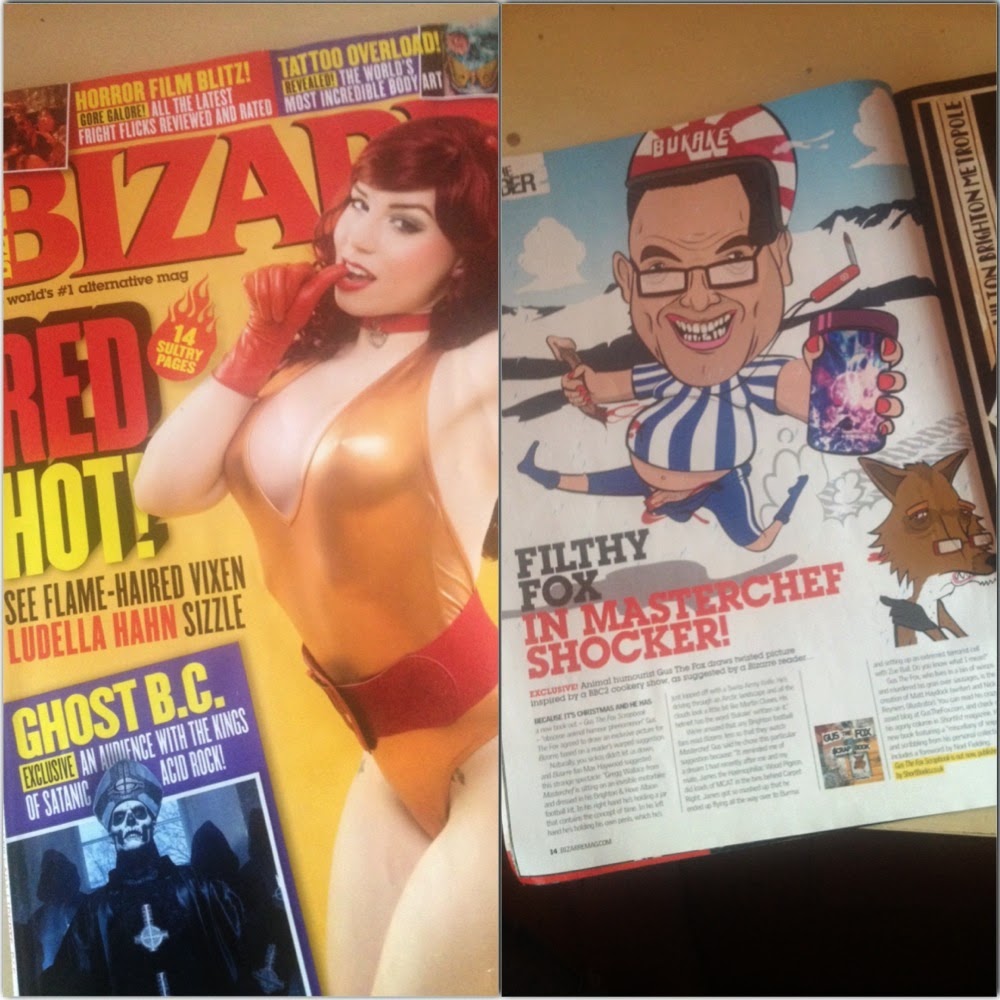 Email ThisBlogThis!Share to TwitterShare to FacebookShare to Pinterest
A FOREWORD
BY NOEL FIELDING

I remember the first time I met Gust the Fox I was standing on his head and suddenly, completely out of nowhere he reached into his pocket, pulled out a rusty knife, and sliced open my nut sack. Hundreds and Thousands poured out all over the grass and I was rushed to hospital. Five minutes after we arrived Gus had sex with an Indian doctor in the bins where they keep used bandages. What a character.

The great thing about Gus is he'll go to extraordinary lengths just to have a giggle. One time he convinced a surgeon friend of his to swap our heads. When the anaesthetic wore off I spent the week scaring turkeys on an organic range with the canadian band Rush. Gus went completely mental and ended up on record breakers giving himself a blow job in front of Roy Castle.

As soon as I start thinking about Gus the memories come flooding back. One time we broke into Paperchase, flooded the place, and re-filmed the Life of Pi using an ashtray and a dead kitten.

I can also recall with great fondness the time Gus gnawed a perfectly formed hole in the shape of number seven through one of my ankles while I was asleep. He dragged me to an alley and shone coloured lights through the hole onto a series of dustbin lids, charging some posh people £15 to watch. We were immediately nominated for the Turner Prize. We were favourites to win until Gus urinated onto Nicholas Sorota's oyster card, then tried to pass off his actions as a statement in support of the rights for bears to have sex with Sean Penn. At this point Nicholas punched Gus in the face wearing a solid gold mitten. Gus' skull crumbled into a fine white powder and for a week his head resembled a woman's purse, soft and folding in on itself. I managed to give it back some shape using a wire coat hanger as the frame work and padding it out with pieces of ripped up dungarees from a clown we had accidentally murdered the night before.

He once told me he was allergic to sitcoms and ham and i'll never forget the day we visited Watney's pond and convinced 150,000 tadpoles that they all had Saar's. We laugh about that now but at the time it was hysterical.
When Gus told me he was planning to write this book I immediately stuffed him into an old rollerskate, forced some felt tips into his eye sockets, and pushed him down Primrose Hill into a barrage of heavy traffic. The last image I have of Gus is of him being dragged towards Camden under a black cab, sparks flying everywhere. I remember feeling a strange mixture of sad and horny.

I love Gus like a brother, even though he gave me a yeast infection. He is one of the truly great foxes. He's a top bloke, a good mate, and an utter penis. He's a one off, and in a world of reality tv and celebrity bullshit we need Gus more than ever. Enjoy his book (I reckon it will be shit) 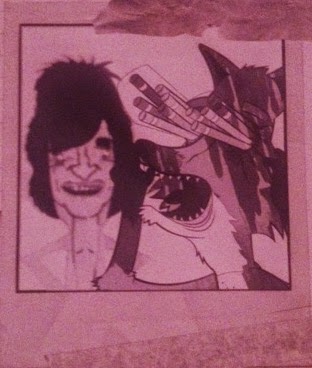 Get a 'Gus The Fox: Crapbook' right fucking now - http://www.amazon.co.uk/Gus-Fox-Scrapbook-Matt-Haydock/dp/1780721773
Email ThisBlogThis!Share to TwitterShare to FacebookShare to Pinterest 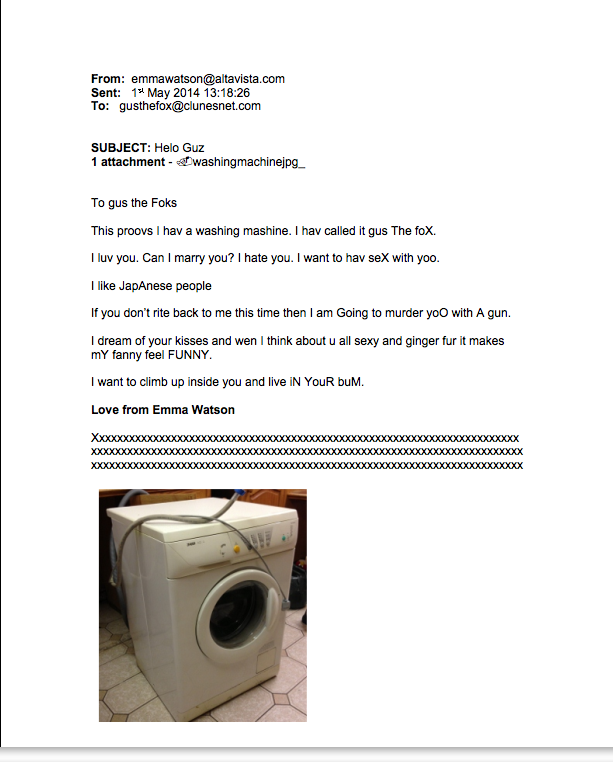