Ex Top Gear presenter Jeremy Clarkson has sensationally claimed that he’s been visited by God and instructed to build an ark in preparation for the forthcoming apocalypse. 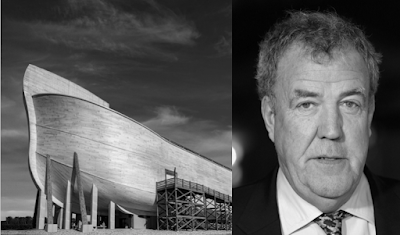 Talking at a press conference yesterday, the presenter and columnist revealed that The Creator Of All Things visited him in the garden of his large family home in Chipping Norton and told him that he must build an enormous wooden vessel large enough to hold two of every single animal species on the planet.

The contentious petrolhead, 59, admitted that at first he’d assumed it was a wind up. “To be honest I thought that it was probably just Hammond or  May in a costume trying to prank me for our Amazon Prime show, The Grand Tour” he said. “But after the bearded figure performed a couple of miracles with a deck of cards and an enormously long handkerchief I realised that I truly was face to face with the Alpha and Omega” he continued.

The task of building an ark to survive a biblical flood was most famously completed by Moses in the Old Testament. For the past few thousand years nobody has had to tackle what is generally considered to be one of the most challenging DIY projects anyone can take on single handedly.

“God told me that I have to build it on my own” claimed Clarkson “ and to be honest I’ve got no idea how I’m going to fit it in amongst my other commitments of pissing about in sports-cars and writing ill-informed gibberish for tabloid newspapers” he griped.

Clarkson admitted that he’s made a start but still has a long way to go if he’s going to get his bulky barge - which will need to be around about the size of The Isle of Wight - completed by the deadline of November 2020.

“It’s a nightmare” he said. “I’ve already cleared out the timber section of almost every branch of B&Q in Oxfordshire but I’ve still got nowhere near enough wood to even make a start on the hull”.
“I’ve done the maths and apparently there are about 18.7 million species on the planet and I need to find two of each. Also, I’m obviously going to have to keep them in separate cages if I don’t want them all fucking and eating each other before God initiates his apocalyptic wrath…I could really do without this” he continued.
When asked how he plans to feed all of the animals the host of Who Wants to Be a Millionaire simply put his head in his hands and confessed that he hadn’t even considered that yet.

He has however started collecting animals and told reporters that he’s cleared out his local branch of Pets at Home and made arrangements with a local farmer regarding a couple of sheep and a cow, but when it comes to more exotic species he knows he’s got his work cut out for him.
“I’ve been online and I’ve got no idea where to find a Honduran White Bat or a Patagonian Mara. Frankly at this point I don’t care if they all drown” he snapped.

When asked how he’ll power his ark Clarkson joked that it will literally have more horsepower than anything he’s ever driven owing to the fact that his cargo will contain over 350 equine species. “On a serious note I’ll probably strap a V8 engine from a Ford Cosworth because it’s an absolute beast and should have more than enough power to shift something that weighs… around 900 million tonnes”.

The Archbishop of Canterbury, Justin Welby, was asked his thoughts as to why Jeremy Clarkson might have been given the job of preserving life on Earth during one of God’s infamous smitings and said that he imagined it was some kind of punishment for Clarkson’s behaviour.
“I dare say it’s got something to do with with the terrible drivel that Jeremy has spewed out of his mouth throughout his career and may be connected to his recent climate change denials and snidy remarks about Greta Thunberg”.


“God’s got a wicked sense of humour like that. It wouldn’t surprise me if he’s told Clarkson that he needs to find a place on the ark for all the fish as well” he concluded.

ARKS A CELEBRITY
With an impending watery armageddon expected any day now, we asked 4 celebs how they’d go about the task of building an ark and protecting all life on Earth from another one of God’s infamous temper tantrums.

GEORGE CLARKE (PRESENTER AND ARCHITECT) 45
I’d bloody love the opportunity to build an ark. I could do it on TV and call it George Clarke’s Ugly Ark To Lovely Ark and we could clad half of it in charred cedar wood and give it some really expensive and bold yellow aluminium feature windows that scream “this is my ark and I don’t care who knows it”. Inside I’d make sure that when you stand by the front door you can see all the way through the entire 300 cubit space.
If we were really clever with the budget I’d try and ensure that every single one of the 18.7 million animal enclosures contains a kitchen island as well.

DAME ELLEN  MACARTHUR (SAILOR) 43
As someone who has broken the record for the fastest solo circumnavigation of the globe I’m always on the look out for a new challenge and I’d love to see if I could beat my time whilst simultaneously looking after several million species of dangerous exotic animals. I’d probably build a twin-hulled ark in the style of a catamaran and use a gigantic sail to harness the apocalyptic winds and zoom across the limitless oceanic landscape with no fear of crashing into land. To be honest I’d be in seventh heaven.

CAPTAIN BIRDSEYE (FISH FINGER PEDDLER) UNKNOWN
If God asked me to do it then we’d all be trouble because, like him, I don’t really exist. Being a fictional character I’d be terrible at building an ark and collecting animals owing to the fact that I’m not real so nothing I do has any impact on events in reality. It would be very stressful because no matter how hard I tried to complete the challenge nothing would happen as I have no physical presence in this realm and am basically just a concept created in an advertising agency to help sell fish sticks to children. I just pray that when it comes to crunch the big man doesn’t choose me.

JESY NELSON (LITTLE MIX) 28
It would be great if God put me in charge of the ark because I’m already halfway through building one. Whilst I’m backstage and the other girls in Little Mix are doing interviews and practicing the dance moves I’m usually busy building my ark which I have taken from venue to venue by 4 Chinook helicopters. At the moment I’m busy sanding down the colossal 400ft rudder. The girls think I’m funny because I’m always going on stage with sawdust in my hair but it’s how I like to relax so I don’t care. 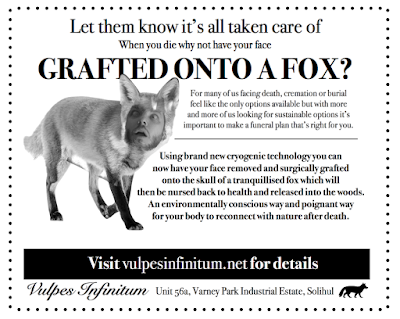 Email ThisBlogThis!Share to TwitterShare to FacebookShare to Pinterest
WOLVES TO BE REINTRODUCED TO BRITAIN'S HIGH STREET

For the first time in more than 1,000 years native bears and wolves are coming snout to muzzle with each other in the UK, but instead of finding themselves surrounded by the towering oaks of ancient woodlands, they are instead thriving in the abandoned shopping malls of the British high street.
European brown bears, thought to have become extinct in the British wilds in medieval times, and grey wolves – which roamed free until the 17th century are currently coexisting in several of the country’s most run down and unloved indoor shopping centres thanks to a radical new project devised by the government’s Department of Fish and Wildlife.

Dustin Thunderthighs, the chief executive of the scheme, said: “We’d been looking for a suitable place to reintroduce some of these species for several years and realised that the baron and desolate landscape of the British high-street is in fact an ideal location. With more and more commercial units closing down due to the rise of online shopping we’ve found that certain species are flourishing.”
The project began in Fareham Shopping Centre,Portsmouth, where a pack of wolves were released in an abandoned branch of Mothercare and a family of bears unleashed into a deserted Snappy Snaps in January. Since then the pack has gone from strength to strength with only 24 human casualties reported so far.
“With hardly any shops still open in the arcade the wolves can pretty much keep themselves to themselves. Barely anyone actually leaves the house to go shopping anymore and anybody who does generally avoids being consumed by wolves so it seems to be a win win for everyone concerned” said Mr Thunderthighs.
“We then introduced bears, wolves and a herd of elk into The Royal Victoria Place Shopping Centre in Tunbridge Wells and they did just as well with only a handful of people getting mauled to death or eaten” he continued.
Since then the scheme has been rolled out across the UK. The Callendar Square shopping centre in Falkirk, Stirlingshire, is now home to a thriving population of lynx and Eurasian bison and boasts  an impressively low 13 human fatalities whilst any visitors to The Broadmarsh Precinct in Nottingham will now be taking their life into their own hands whilst trying to avoid wild boar as well as cave lions, which haven’t been a part of the British countryside for almost 40’000 years.
Grantham Pelmet, 54, a shopper from Nottingham, said: “I think it’s a great idea. This would have all been woodland 500 years ago so I think it’s only right to hand it back to these dangerous bloodthirsty animals if people aren’t going to support the high-street and instead do all of their shopping on Amazon. If that means a few people get devoured by the gnashing teeth of these monsters then so be it.”
But not everyone was so supportive of the initiative. Yolanda Blunderbus, 73, from Preston was furious.
“Well I think it’s a bloody daft idea” she said. “I used to enjoy pottering around the precinct with my friend Meryl until she was dragged into a boarded up branch of Tie Rack by an enormous bear and now I rarely bother”.
“I mean, it’s nice to see herds of bison grazing in the food court when you pop out for a wander around the shops but it just seems like the cons outweigh the pros.” She added.
With only 112 people losing their life to reintroduced carnivorous species so far this year it’s expected that a lot more indoor shopping centres will be reconnecting with their wild side over the coming years. 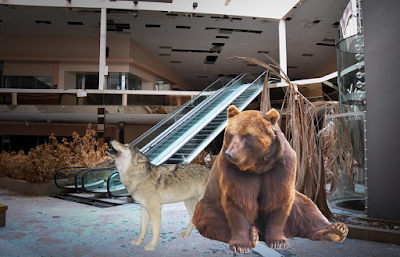 WOLF YOU BELIEVE IT?
Six things you never knew about wolves