❷ A smear? Or maybe a splatter? Yeah, I suppose this looked a bit like a splatter (grey)

❺ A pile of hooves

❻ Picture a magnificent carriage being pulled across the sky by six beautiful unicorns. That's what I was hoping the next one would like but instead instead it just looked like someone had spilled a Pot Noodle down a toilet.

❼ Another pile of hooves (next to some nettles)

❾ This one looked like a smattering of paint, or perhaps a grubby stain...It was another sort of smear really...I'm starting to think that today wasn't the best day to do this really. It's generally just overcast and I'm struggling to make out anything at all. Starting to wonder if I'm wasting my fucking time to be honest. Fed up. 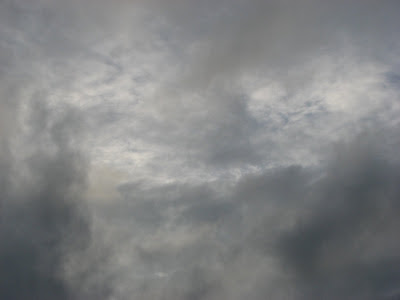 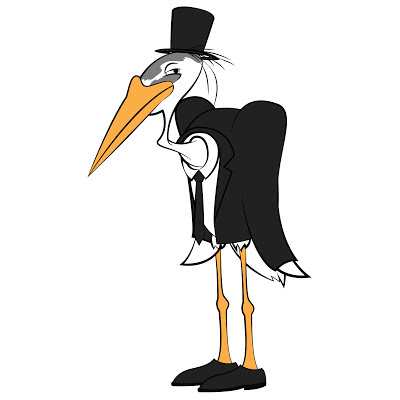 AT A HERON'S FUNERAL. GETTING SOME DIRTY LOOKS. THINK SOME PEOPLE THINK I'M A HYPOCRITE BECAUSE IT WAS ME WHO KILLED THE CUNT. 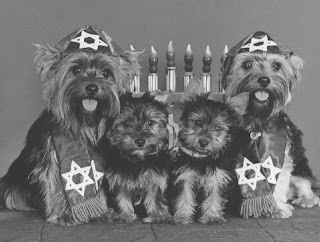 London is one of the most multicultural cities in the world. Nowhere else do so many religions and faiths live in such close proximity as people strive to relate humanity to spirituality and moral values, and people have come up with all sorts of wacky bollocks in an attempt to explain the meaning of life. Some people believe in a lad with a elephant's head, some people fancy the idea that the world was made out of clay a few years ago by an old fella and others are pretty sure that we all come from another planet and we just forgot.
Unfortunately there isn't a shred of evidence to support a single element of any religion which you'd think would be a bit of a problem, but it's not because people have invented something called 'faith' which basically means that they get to stare at you with a smug grin pasted across their stupid face if you ever feel compelled to challenge whatever nonsense they've chosen to dedicate their life to.
One of the things that's always confused me most about religions is the fact that me and my mates don't get a look in. Some humans will spend their entire life enjoying the companionship of animals, but if you ask them if their four legged friend will be waiting for them in heaven then they'll just laugh and carry on trying to flush it down the toilet.
A blind man can have a guide dog whom he might consider to be his best friend, closest member of family and most loyal servant. The guide dog might save his life, look after him and show him more love than anyone else on Earth, but you ask anyone then they'll tell you that that guide dog isn't getting in. You ask anyone and they'll tell you. in no uncertain terms that St Peter's hammered a big fuck-off, 'No Dogs' sign onto the pearly gates and hammered a bit of wood over the little dog flap made of clouds.  The whole thing's a bit of a kick in the teeth when you remember that humans invented all this ridiculous dogma and it would have been just as easy for them to have said that there was a nice section of afterlife reserved for all of God's creatures. But alas, you lot have decided that we're all destined to float around in the eternal abyss or purgatory. Thanks for that. Arseholes.
Well it turns out that two can play that game. Recently an influx of new religions have been created by animals who've decided to jump on the eternity bandwagon. Personally I'm not interested in joining a single one because some of them sound as daft as the things you lot came up with thousands of years ago. Anyway, Here's a list of animals and what they believe in.

GOD - Tommy The Chimney
BELIEFS - Geonism is a monotheistic religion. Most Geonists believe in a chimney called Tommy The Chimney, a chimney pot which has a face crudely drawn on the side of it in pen. Pigeons believe that one day the chimney will catch fire and the world will end. They worship Tommy by sitting on top of chimneys and cooing. The footballer Gary Linker is a keen Geonist.

GOD - A bag in a tree
BELIEFS - Some of them have started worshipping this bag that's got caught up in a tree but they haven't really got the nitty gritty down in terms of beliefs. It's not even really a religion in my opinion.

GOD - The Four Bins Of The Apocalypse
BELIEFS - Rats believe in four bins which exist in secret locations on the four corners of the globe. The first bin is called 'Tar' and controls famine. The second bin is called 'Plag' and controls disease. The third bin is known as 'Albinus' the bringer of death. The third and final bin is called 'Alan Lamp' and can be found behind Morrison's in Hemel Hemstead. Like finding a bunch of horcrux's, Binduists believe that if they manage to visit each of the bins of the apocalypse then they'll be transformed into humans and spend eternity working at the Daily Mail.

GOD - Martin Clunes
BELIEFS - Foxes have started worshipping Martin Clunes. Vulpians believe that if they pay homage to him by leaving things in his back garden (condoms and Milkybars etc) then he won't lay down his wrath upon them. It won't work because Clunes has an unquenchable appetite for attacking foxes. The other day he ran out
of his wendy house and booted me as hard as he could in the bollocks.

OWLS
RELIGION - Sexychristian
GOD - Sexy Chris
BELIEFS - Something about a magical pig? I don't know. I wasn't really concentrating. I don't think this is a real religion. I think Sexy Chris is talking out of his fucking arse.
Email ThisBlogThis!Share to TwitterShare to FacebookShare to Pinterest 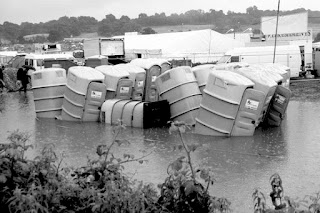 Everybody loves summer. It's quiet, clean, warm, dry, relaxing and peaceful. In the summertime people can go outdoors and find some space and forget about all the months they've spent in buses and tubes, crammed up against other damp plebs, as they invade each other's personal space in an attempt to avoid the disgusting drizzle outside. In the summer you can wander about in your own world, sit in a field and chill out for a bit before everything turns shit again in Autumn. It's important to have an affair with the sun now before the rain finds out and starts beating you up and calling you a cunt again. Why then do people choose to go to Glastonbury Festival? A long weekend in a wet field surrounded by pissed students talking bollocks, old people who stink and the grand spectrum of bastards in between. I enjoy repulsive conditions as much as the next guy (probably quite a lot more in fact) but even I don't really like the sound of being in a Portaloo while some passing jester decides it might be funny to tip it over and set it on fire. I don't like the sound of sitting opposite my mate Sexy Chris after he's gobbled down loads of ketamine and watch as he tries to eat his own legs (again). I don't like the idea of getting trench foot and standing in a field full of so many people that it feels like I'm a member of a First World War recreation society that's got way out of hand, and I certainly don't like the idea of watching Mumford and Sons.
Luckily, these days, there are hundreds of smaller scale festivals all over the country for people who like spending 100 times less money, watching bands that are 100 times crapper and generally having 100 times less fun. Think what an average time you could have at the Bromyard Folk Festival this year. And just imagine how OK the Didmarton Bluegrass Festival might be if you gave it chance. And that's just the start of it because the music festival phenomenon is taking the animal kingdom by storm and I've got exclusive details regarding some events that are so underground that some of them are actually underground. Avoid the crowds this summer, check out some of these festivals and tell your friends you were there. They'll be really jealous / worried about you.

RATFEST
LOCATION - In a skip on the industrial estate in Tottenham Hale. (Someone's written the word 'Minge' on the side of the skip in red paint if that helps.)
GENRE - There are 3 stages and they're all mainly punk and extreme metal.
WHO'S PLAYING? Plague, Ratt, The Bubonics, Gnawvax, BigMouse 4, Roland etc
ARE JEWS ALOUD IN? - Yes. Jews are very welcome.
ABOUT -  Not really a family festival but good if you like loud music and hundreds of rats. Last year a gypsy turned up and killed everyone with a mallet. Great toilet facilities.

FEST IN THE TIP
LOCATION - The tip near the Winnersh flyover
GRENRE - Mainly pop music. They also have a stage where seagulls can listen to bhangra.
WHO'S PLAYING? - Some frogs? I think some frogs are playing. I saw some frogs play last year and they were great. Also Mika is playing.
IS IT SPONSORED BY MARMITE? No, it's not. No.ABOUT -  Nice little festival in the middle of a working tip. It's cleaner than Glastonbury and the food's better than Reading and Leeds. I went last year with my mate Sam Hamper and we saw a bulldozer, a knackered old fridge and a really poorly crow. It was great. 10/10

APPLE CORE FESTIVAL
LOCATION - In the bins at St Thomas' Primary School in Deptford
GRENRE - Ambient/Trance/Tropical
WHO'S PLAYING? - Mainly wasps.
WHO IS THE BEST WASP? Probably Owen Bunting. Having said that that though, Keiron Cooper's on good form at the moment.
ABOUT -  Festival in a bin featuring hundreds of wasps 'performing' on and old apple core. Hypnotic droning sounds. $800 per ticket.

DRAINAGE FEST
LOCATION - Down the Drains
GRENRE - Spoken word / comedy
WHO'S PLAYING? - An eel, some mice, a snake that's trapped in a pipe, Rhod Gilbert and a dragonfly called Alex Biscuit.
PROSTITUTES? Yes. Calm down. There'll be plenty of prostitutes for everyone.ABOUT -  Nice little spoken word and comedy festival that happens every year down the sewers. Apparently this year Alex Biscuit is going to be reading some poems he's written about ponds. Can't wait.

FOXJAM
LOCATION - All over London
GRENRE - Screaming, sex noises and tedious barking
WHO'S PLAYING? - Me, Double Denim David, Vile Clive, Rufus Beard. All the usual rusty rotters basically.
WILL FERN COTTON BE THERE? Unfortunately she has been before so, maybe.
ABOUT - We all meet in some poor fucker's garden at about 2am and all have sex and start fighting. We don't stop until the morning. Sometimes the person in the house starts shouting at us and crying and calling us all a bunch of ginger cunts. We try and do it every single night throughout summer. It's brilliant.

Via Shortlist Magazine - http://shortlist.com/cool-stuff/music-festivals
Email ThisBlogThis!Share to TwitterShare to FacebookShare to Pinterest 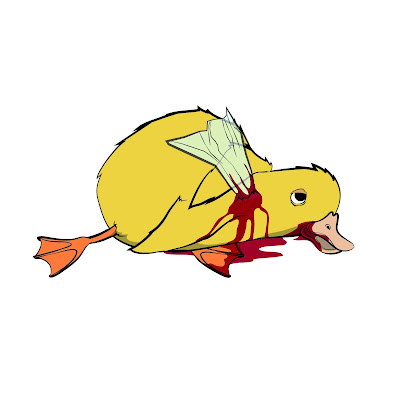 I JUST GLASSED A DUCKLING AND NOW EVERYONE'S GIVING ME A HARD TIME.
Email ThisBlogThis!Share to TwitterShare to FacebookShare to Pinterest
Newer Posts Older Posts Home
Subscribe to: Posts (Atom)