AN IDEA FOR A NEW PERFUME

What does it smell like? : Not great. I'm not going to lie to you it doesn't smell great at all.

Who's advertising it on the bloody poster? : Well it's a fragrance for a man or a woman so maybe someone like Angelina Jolie for the girls and someone like Nick Faldo for the boys.

The TV ad : Maybe something like...It's set in a big warehouse full tinned tuna. There's a man unbuttoning his shirt (maybe he works here in the warehouse? Maybe he's a fisherman - It's not clear). Anyway he's striding through this massive fuck off warehouse like he owns the place and he's fit as arseholes. (Everything's in black and white and we've got Sigur Ros pounding away in the background). The man walks up to a woman who's leaning against a digger and they start getting off with each other. After a couple of seconds the man explodes and turns into a swarm of bees. The woman screams and starts to have a panic attack. The camera zooms into the woman's eye and we see the bottle of this perfume. The voice over (Professor Brian Cox?) says "Mmmmm. That smells nice" and then it's basically just a case of sitting back and waiting for the bunce to come rolling in. 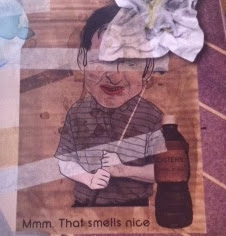