TOP CUNTS:
GANGS OF
THE EDL
In case you were in any doubt about the fact that the far right are both braindead and terrifying in equal measures, I've been wading through some of the more depressing chambers of Twitter in a quest to learn a bit more about the mentality of the people who are seemingly winning the current war of civilisation.
Go and check it out. They're all there, talking bollocks and spelling racial slurs incorrectly. On the whole they each look like the bloated carcass of a walrus that's washed up on beach and had swastikas scratched into its flesh by a group of naughty schoolboys. They're all great and after spending a bit of time reading what they have to say you'll definitely grow to love them and definitely not want to reintroduce the smallpox virus into every corner of the planet in a bid to instigate the apocalypse as soon possible.
To make it a bit more fun I've turned it into a game of 'Top Trumps' but be warned, it's not really that fun and the content of this post is fucking offensive and the views expressed by these sad little plonkers contain some of the really bad words that I wouldn't even use to describe my mate Sexy Chris.

There's something about the EDL presence on Twitter that is quite interesting however. It's funny how supporters of the EDL all have similar biogs at the top of their profiles. They're all a basic variation on each other's. Almost as though they haven't got a single fucking braincell and just regurgitate whatever bonkers horseshit they've just read elsewhere.

It's also weird how they all seem to hate their wives. That doesn't seem like something you should brag about. If you're living in a house with someone who doesn't talk to you or have sex with you and you just have to sit in your cum-encrusted armchair moaning about immigration whilst your wife stares at you and your fat belly with disgust from the other side of your stinking prole hole, then you're pretty much one of the saddest cunts around and you've turned your life into an absolute bollocks. An absolute bollocks I tell you.

Anyway, enjoy the 'Top Trumps'. Cut them out, use them and enjoy them. Whilst we play, perhaps we can learn something about these Cataclysmic, Storm Force 12, Sultans of Shit. 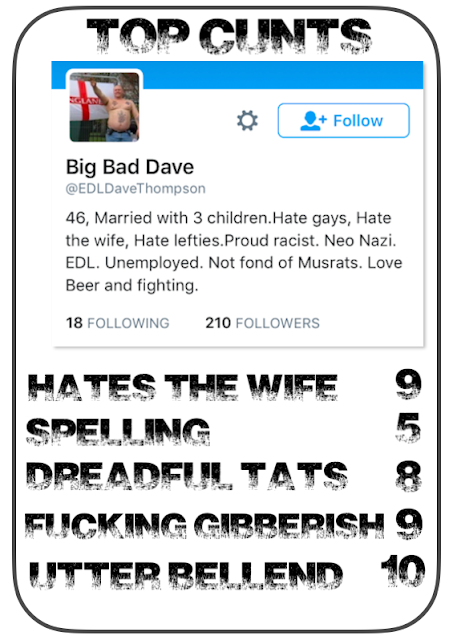 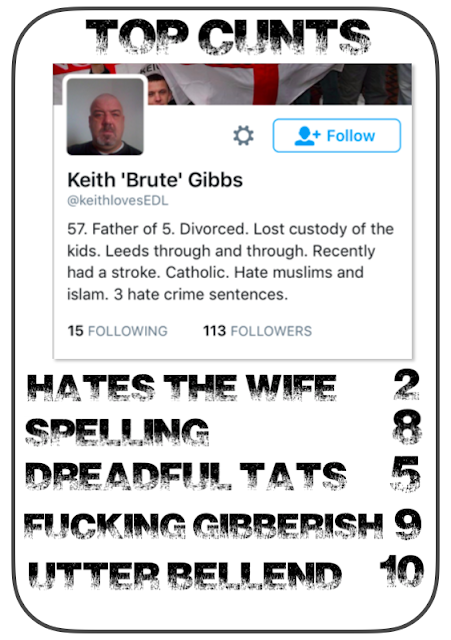 I guess when most people lose custody of the kids they don't stop to consider whether or not they're an absolute shitmachine. 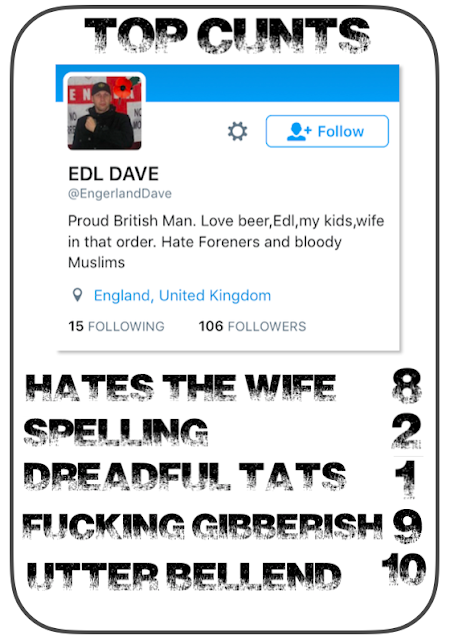 This guy loves Carling more than the person he has to share a bed with. What a fucking cool dude. I want to be him. I want his life.
(Way to spell foreigners, genius) 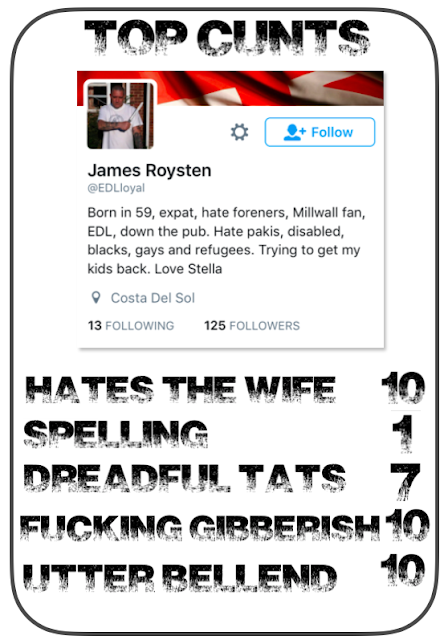 He's trying to chop his own arm off with a turkey baster in his profile picture so we can assume he's hardly Oxbridge material.
Extending your hatred to the disabled seems like a pretty extreme move as well. It would be amazing if he got quadraspazzed by a bus and then you got to watch him outside the hospital in his Doc Martens trying to stamp on his own head.
(It's unclear whether Stella is his wife or his beer. Given how it seems to be trendy to 'hate the wife' we'll assume he's talking about the latter) 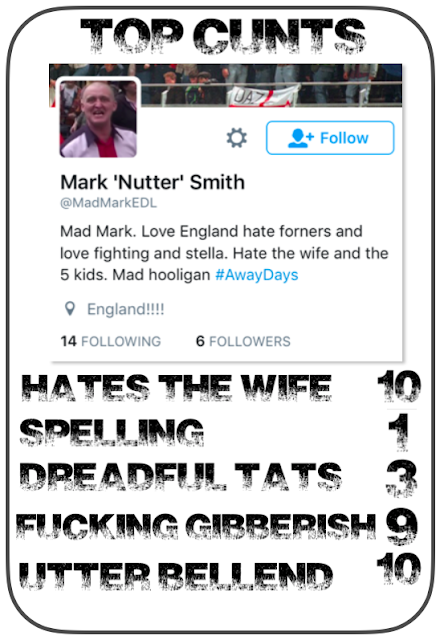 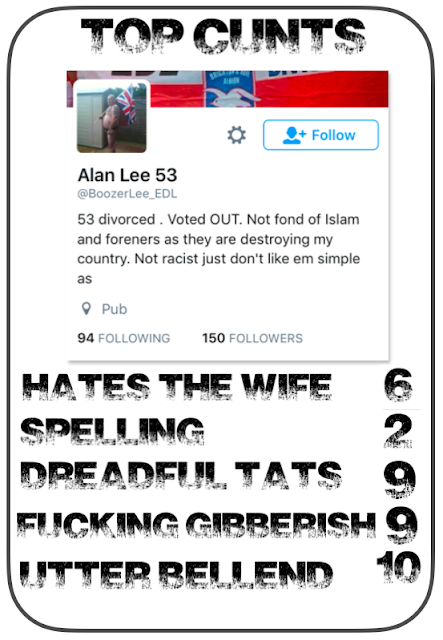 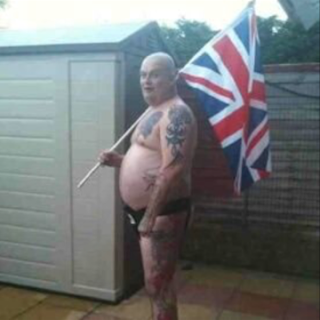 This is what we want British people to look like; A toddler with an ageing disease that's been brought up in a pitch black cave on a diet of of its own tods.


Don't be fooled by his suave and sophisticated appearance, a closer inspection of his account reveals that he's actually a horrid cunt. 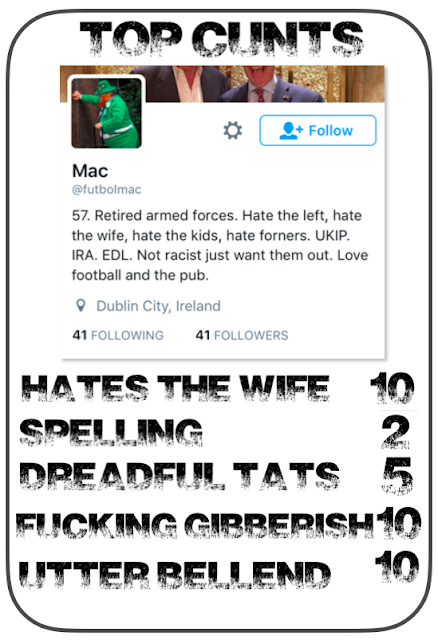 This is a UKIP supporter. Those are the facts. 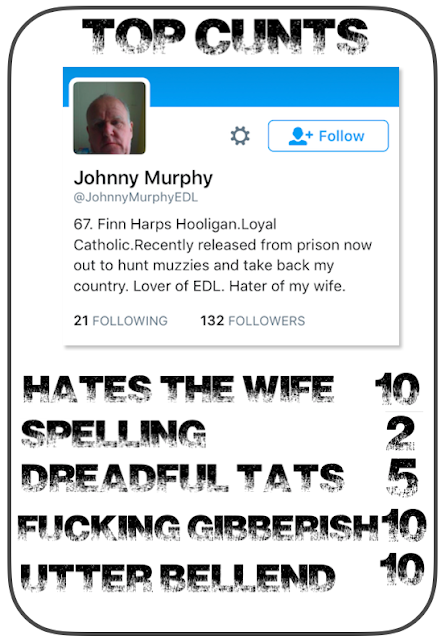 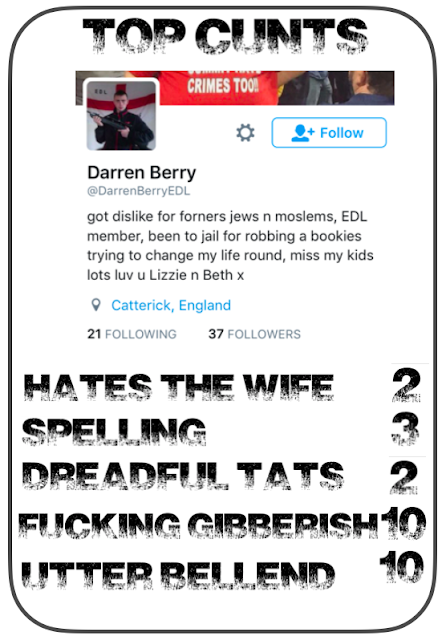 Holding guns in pictures and threatening to kill people is one of the best ways to start changing your life around in a way. 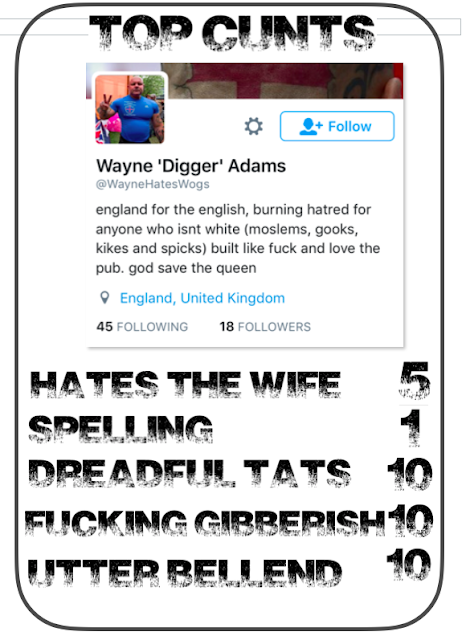 Top Tweet : "Not a racist or anything, just despise coloured folk.
Finally, a rational and considered argument to an age old issue. 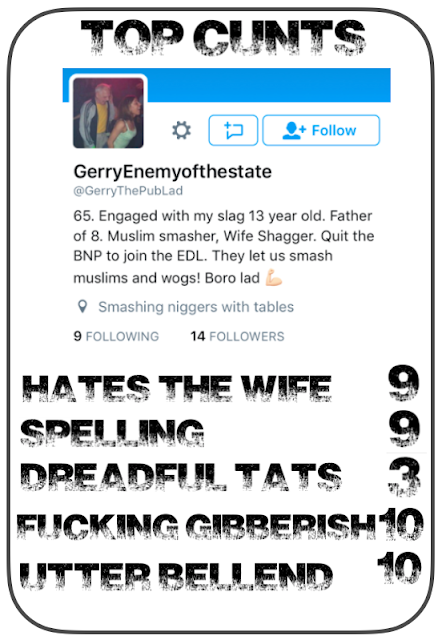 This one appears to be a paedophile. What an absolute legend. 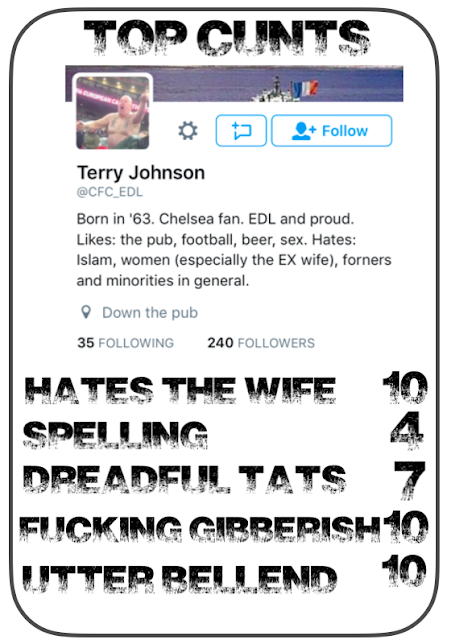 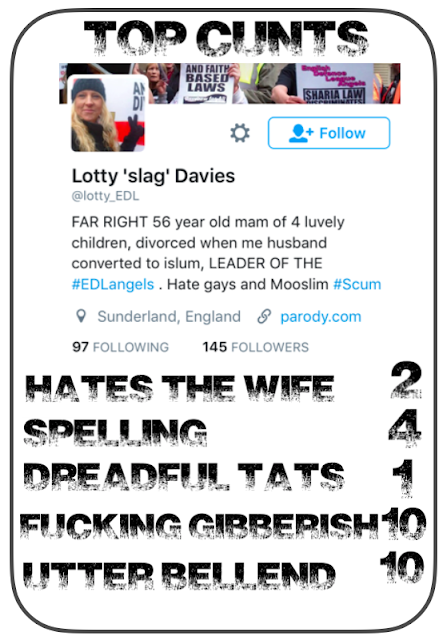