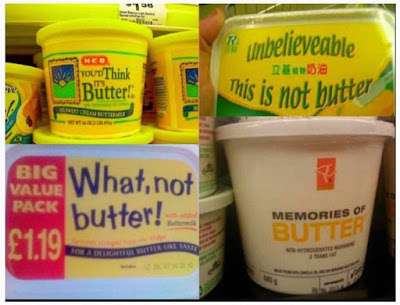 There's no doubt that butter plagiarism is one of the hottest topics in the country at the moment and with every low-budget, margarine peddler desperate to produce their own version of 'I Can't Believe It's Not Butter' whilst simultaneously trying to avoid a lengthy court case, there's never been a better time to produce your own knock-off spread while the going's good.
'You'd think it's Butter', 'What, not butter' and the enchantingly named 'Memories of Butter' have already been snapped up by canny businessmen, guaranteed to make their millions out of the thriving bargain-basement, yellow-spread, industry, but if you want in on the action and are worried that all the best variations have already been snapped up then fear not because I'm selling the below options for a one payment of just £50.
That's right, you can walk away with any of the following buttery titles for just £50. The counterfeit dairy industry is like the Klondike gold rush of the 1890s and you'd be fucking mental to miss out.
Pick from the following titles...