YOUR
GUIDE
TO
THE
NEXT
PRIME
MINISTER. 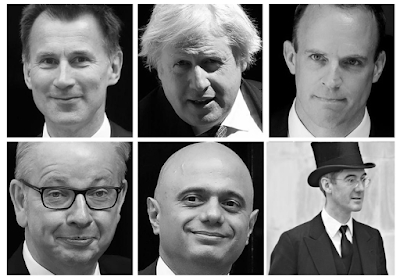 NAME: Boris Johnson
AGE: 54
ABOUT: Looks like several dogs standing on each other's shoulders and wearing a coat in an attempt to get into a cinema to watch a film about a bum that's come to life.
Looks like what would happen if the moon lost its job and started sleeping rough around Milton Keynes and stealing suits from outside the British Heart Foundation charity shop.
Called black people "flag waving piccaninnies with watermelon smiles and said they were thick compared with "orientals"and accused the president of Turkey of fucking a goat. Basically says the sort of stuff your Grandad would say if you thwacked him around the head with a dildo until he got brain damage.

NAME: Michael Gove
AGE: 51
ABOUT: Looks like a man who's taken off his space helmet on Mars and has seconds left to live.
A man so devoid of integrity that he doesn't even have any in or around his own chin.
A man who looks like a haunted ventriloquist dummy that's been carved out of a turnip by a paedophile.
Michael Gove looks like he's had his face cut off by a serial killer and then used as a sort of mitt to extract honey from a bee hive before having it carelessly tossed back onto his skull by someone in a hurry.
Jogs around London like someone who's just killed, fucked and eaten (in that order) a woman in a local park.
After his time as Education Secretary, he's now less popular with teachers than chicken pox and headline.

NAME: Dominic Raab
AGE: 45
ABOUT: Looks like someone in the middle of a compound nervous breakdown who's stapled a bunch of wafer thin ham onto their own head before going on a rampage in a South London train station armed with a machete.
Says that the average food bank user is taking the piss, feminists are obnoxious bigots and that the NHS is a childish wish list.
The sort of shit he comes out with makes you wonder if his forehead is a prosthetic mass of putty placed there to cover up his fucking horns.
Even his name looks like it's probably some sort of anagram of an ancient, malevolent demon from Mesopotamia.

NAME: Jeremy Hunt
AGE: 52
ABOUT: A man who's done so much damage to the National Health Service he makes Dr Harold Shipman look like Florence Nightingale.
A man who looks like he'd rohypnol his closest friends at a dinner party and sell their organs on the back market.
His wry, smug, smile looks like it should be accompanied by the sound of a high court judge lambasting him for his lack of remorse at the end of harrowing and disturbing court case.
Hunt is a man who is referred to as Jeremy Cunt every single time his name is mentioned on the news due to the sheer power of word association and unconscious, Freudian, impulses.

NAME: Sajid Javid
AGE: 49
ABOUT: A man with a perfectly round head who's skull will presumably one day be displayed in Ripley's Believe It Or Not Museum causing future anthropologists to even question its authenticity.
A man who stands with such a wide power stance, in an attempt to evoke authority, that he looks like he's just had a fire extinguisher pushed up his arse by a bear.
He's constantly voted for tougher immigration and benefit cuts like some sort of cunt, despite recognising that those people threatened with deportation could have been his parents.
He's kicked down more ladders than a fucking scaffolder.

NAME: Jacob Rees-Mogg
AGE: 49
ABOUT: he looks like a drawing of Postman Pat that's been scratched into the side of a spinning Jenny by a Victorian chimney sweep. And not in a good way.
He looks like a 19th Century steam engine salesman who spends his evenings drowning children in the lake at the bottom of his garden and reciting incantations from Aleister Crowley's Satanic Bible.
He looks like what might happen if Adolf Hitler was ever reincarnated in the form of the Windows 95 'helpful paperclip' and sent back 200 years through a wormhole to campaign against the abolition of the slave trade.
The kind of simpering, hat-wringing simpletons who support Jacob-Rees-Mogg are the types of people who camp outside Buckingham Palace for 3 days, crying and waving their Union Jack flags whilst awaiting the arrival of a royal baby, whilst back in their bedsit - littered with Sprite bottle containing their own piss - the eviction notices continue to rain through the letterbox. Unaware of the irony and devoid of hope. These are the worst humans in the world. Evolved, miraculously from the types of people who ran into gunfire during the Crimean War because a man with a handlebar moustache who went to Cambridge told them to.
Fucking hell.
Email ThisBlogThis!Share to TwitterShare to FacebookShare to Pinterest
Newer Post Older Post Home