Anyone who’s watched the news recently will already know that it won’t be long now until the UK is nothing more than a baron dystopian wasteland controlled entirely by gangs on dirt bikes with human skulls for helmets. Many of us are now expected to die in a nude knife fight over the last bottle of water in our village as the cruel sun beats down on our weather-beaten bodies! But will it be all that bad? We ask 5 celebs how they’d survive …

LIVING IN A POST-APOCALYPSE BRITAIN 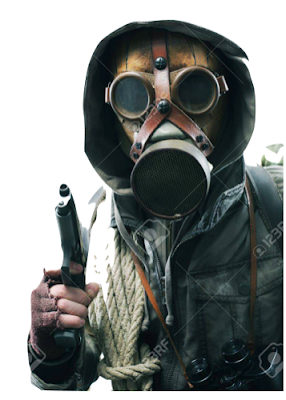 KIRSTY ALLSOPP (Television Presenter)
As soon as it all started going a bit ‘Mad Max’ I think I’d get in my Range Rover and drive up to Scotland and find a really remote cottage in the middle of nowhere so that I’d be as far away from danger as possible. Then I’d bust my way in and kill whoever lived there and bolt the doors shut behind me and wait for it all to blow over.

GEROGE MONBIOT (Writer and activist)
After spending my entire life campaigning and writing about environmentalism and climate change it would be a sad day indeed to wake up in a post-apocalyptic dust bowl having realised that it’s now too late. However, I’ve always said if you can’t beat them, join them. With that in mind, as soon as society begins to collapse and scavenging tribes of bandits take control over the wastelands of this once great country, I’ll be the first to tattoo my own face and join a motley crew of hooligans on quad bikes who’ll tour the arid landscape murdering and killing everyone and anything that stands in our way.

BORIS JOHNSON (Prime Minister)
As somebody who’s actively encouraging this country to descend into a terrifying no-mans-land, I’ll be fine because as PM I’ll have access to a secret bunker that’s hidden under a hillside in Kent. Once there I’ll be able to see out my days eating delicious tinned produce from Fortnum and Mason whilst I crack on with my hobby of painting buses on the side of milk crates. Sadly I won’t be able to bring my children with me as there’s only room down there for fifty people, so I’ll just take a couple of girlfriends who won’t be able to escape out of either of the 25-ton blast doors constructed from steel and reinforced concrete.

BEAR GRHYLLS  (Survival Expert)
I reckon I’d probably quite enjoy it if everything went tits up because then I could finally employ some of my survival tactics, such as drinking my own piss, without feeling like I’m completely wasting my life. I might encourage my wife and children to embark on a life-threatening swim across the ocean to one of the more remote Channel Islands where I could keep them warm and dry by covering them in my own excrement. We could eat insects and sheep’s eyes and drink my piss and I reckon we’d have the time of our lives.


As an entrepreneur I’d be on the look out for how to make a quick buck from the inevitable downfall of Great Britain. Whether it’s food, ammunition or gigantic rusty thunder-domes used for gladiatorial motorbike jousting tournaments, I’d stockpile as much as I could and savagely undercut anyone like Peter Jones who had the same idea. I’d spend my days atop a rusty throne inside a fortified cave patrolled by barbaric cyberpunks just like I do now and life wouldn’t seem that much different.
Email ThisBlogThis!Share to TwitterShare to FacebookShare to Pinterest
Newer Post Older Post Home