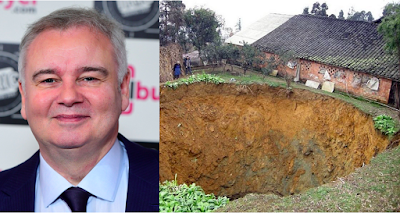 TV Presenter Eamonn Holmes yesterday announced that he would be stepping down from all of his broadcasting commitments, effective immediately, so that he can concentrate on a personal project that he’s started working on in his back garden...Digging a hole to the centre of the Earth.

The 59 year old Sky News Anchor has revealed that he’s already started work on his back yard abyss and reckons it should be open to the public by the end of the year.
Eamonn went on to explain that he intends to capitalise on this venture by opening up a small cafe next to the gaping void which he plans to turn into a tourist attraction. “Ruth and myself have just returned back from a holiday in the USA and they’ve got all sorts of interesting roadside attractions”. He went on to say “whilst we were in Wisconsin, we saw the World’s biggest ball of twine and it was shite...but they were raking it in”.

The host of This Morning says that the yawning chasm will pretty much back directly onto the A339 near Basingstoke and provide a much needed tourism hotspot for anyone travelling between Guildford and Reading on the M3.
The current record for the deepest manmade hole belongs to the Kola Superdeep Borehole in Northwest Russia which reaches a depth of 40,230ft (7.619 miles) but the Irish Talkradio host says that his gorge will blow that out of the water.

“I can’t say I’m particularly impressed by any of these Russian research boreholes. The deepest one doesn’t even get halfway through the Earth’s crust and it’s only 9 inches in diameter”
“Mine’s already loads wider than that and it’s pretty deep as well. If you fell into it you could really do yourself a mischief and I’ve only been at it for a week”.

When asked what he’d do when he hits the seven mile mark and the mud starts boiling with hydrogen, Holmes said “I’ve got a TradePoint card at B&Q and that means I can afford some pretty serious gear. The gloves and boots that I picked up look more than up to the job of protecting me from things like geothermal silicon dioxide”.

“I’m not stupid, I know I’ve got my work cut out for me” Holmes continued “ The Earth’s mantle alone is 1800 miles thick and flows with the consistency of asphalt, so there’s every change that I’m going to have to put down the spade and make a trip to my local plant hire company and get to grips with how to operate a digger”
“I just think it’s crazy that we can put a man on the moon but we don’t even know what’s in the centre of our own planet when all we need to do is roll up our sleeves and put in a bit of effort”

Asked what he’ll do when it’s finished, Holmes joked “I’ll probably sit back and Ruth can run the cafe and sort out the admission fees for a bit. I dare say I’ll be ready for a cup of tea and bun...I’ll be spent”.
When Eamonn’s wife and co-presenter, Ruth Langsford was asked her thoughts she replied “We’re really worried about him at the moment and he’s talking to a special doctor about all of this”.
Email ThisBlogThis!Share to TwitterShare to FacebookShare to Pinterest
Newer Post Older Post Home