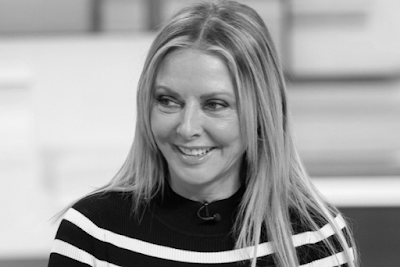 Carol Vorderman has revealed this week that she has no idea how she got any of the solutions right during her tenure as the arithmetic co-host on Channel 4’s Countdown and guessed them every single time, possibly making her the jammiest person in human history .
The buxom brainiac has revealed that she’s always struggled with mathematics to the point of being diagnosed with dyscalculia at school. “I’ve never been able to do maths” said Vorderman, “numbers just don’t make sense to me at all and they when I look at them they just dance around the paper and make me feel dizzy”.

The broadcaster went on to explain that her friend had encouraged her to go and try out for the job on Countdown for a bit of a laugh. “When I got there I was just expecting to wear a tight dress and flip over a few numbers, but when a particularly complicated equation popped up and stumped the contestants the crew turned to me to solve it, I panicked and wrote down some gibberish and somehow got it right”. Vorderman was given the gig but knew it was only a matter of time before she was rumbled. “I knew my luck wouldn’t last but at the time I just really needed the money”.

She made her debut television appearance in November 1982 in what was to be the first ever programme broadcast on Channel 4. “I only had to guess one on the first episode and unbelievably managed to get it right again” said Vorderman. “I couldn’t believe I’d got away with it for a second time. I was a bag of nerves because I was sure that humiliation was just around the corner”. To start with she says it was just one sleepless night after another but as weeks turned into months and months turned into years her luck just didn’t run out. “I used to be standing there praying that the contestants would get it right, but every time they didn’t I just seemed to be able to pull it out of the bag” she joked.

“None of my friends believed me when I told them that I was guessing all the solutions and randomly writing down numbers and symbols but when they tested me down the pub they quickly discovered that I clearly didn’t have a fucking clue how to solve even the simplest maths problem”.
Busty Carol went on to claim that after a while she started to believe that she must be some sort of god. “After a year on the show I had to speak to a therapist because I was convinced that I must be the reincarnation of Horus The ancient Egyptian god of mathematics. I couldn’t see any other explanation as to how I kept managing to pluck these algebraic solutions out of thin air time after time”.

The Loose Women presenter also joked that her bizarre luck with numbers didn’t seem to extend to any other area of her life. “I started to think that if I could do it on Countdown then maybe I’d be just as lucky when it came to the National Lottery but to this day I’ve never managed to get a single number right”.

Professor Brian Cox went onto Twitter and claimed that “to put these odds into context you’d have to take a ‘1’ followed by as many zeros as there grains of sand on Planet Earth.”
He continued “Occam’s razor is a principle in philosophy that assumes that the most likely explanation to a problem will usually be the answer and in my opinion it’s more probable that Carol is actually really good at maths but just doesn’t realise it.”
Email ThisBlogThis!Share to TwitterShare to FacebookShare to Pinterest
Newer Post Older Post Home