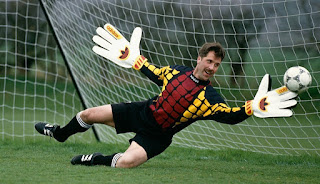 Police are investigating ex-England goalkeeper, David Seaman after a confusing performance at a live Q&A session which took place in a small theatre near his home town of Rotherham.

‘An Evening with David Seaman’ was due to be an informal and lighthearted event where fans of the football star would be able to meet their hero, listen to anecdotes about his 23 year long career and ask him questions, but after a series of unprompted denials that he’d ever killed anyone, alarm bells started to ring  and the South Yorkshire Police force were informed.
“Me and the wife got tickets because we’re both massive Arsenal fans” said audience member Rilkie Balbatross. “It was a great evening until right at the end when we started asking questions” he continued. “I asked David a question about his first game for England in 1988 and he answered by saying that he’d never murdered anyone with a hammer and buried them in the woods on the outskirts of Chesterfield” said Balbatross. “Everyone just went silent and looked confused until the compere laughed awkwardly and moved on to another question” he continued.

The microphone was handed to audience member Ian Pin who asked a question about the camaraderie of the camp during England’s Euro 96 campaign but the same thing happened again when the football legend professed that he was Innocent of any violent crimes and definitely didn't have blood on his gloves. “It was really weird” said Pin. “I’d asked him something about Euro 96 and he just started talking about how he’d never gone on a killing spree and disposed of the bodies in the Humber Estuary off the back of his mate Gavin’s boat. I never said he had” continued Pin.

An uncomfortable atmosphere filled the small Civic Theatre as people started to leave. The questions about Seaman’s career continued as he batted them away with specific denials relating to bloodshed and homicide that he claimed were in no way linked to him.
Audience member Yarnold Pentecost said “it was getting really awkward so I tried to lighten the mood by asking a question about whether David had any regrets about rocking his famous tash and ponytail combo for so much of his career and he answered by claiming that in 1998 he hadn’t sealed the doors to a house in Doncaster and set it on fire”.
“He just started looking at his feet and mumbling that if he had done any of that stuff then he’d be in prison now and he didn’t know why everyone kept bringing it up” continued Pentecost.

After about 45 minutes two officers arrived and removed the second most capped goalkeeper after Peter Shilton and took him away in handcuffs.
“It was a weird end to the evening. He’s obviously guilty as sin” said Mr Pentecost. “And we didn’t even get a refund” he continued. “That’s the last time I get tickets for the theatre” he joked.
At present Seaman remains in custody and the investigation continues.
Email ThisBlogThis!Share to TwitterShare to FacebookShare to Pinterest
Newer Post Older Post Home