The world of zoology was thrown into turmoil last night when Neil Morrissey, star of 90’s sitcom Men Behaving Badly, sensationally announced that there’s no such thing as eels and that they were simply a rumour he’d started for a laugh to fool co-star, Martin Clunes whilst larking about on set.
“We used to muck about when we were filming the show and try and trick each other into believing all sorts of nonsense” said Morrissey who’s recently appeared in the gripping police drama, Line Of Duty.
“ I remember that I’d tried to convince Martin that there were these really long fish that sort of looked like snakes and lived in the River Thames and I just came up with the word eels becaube I was mucking about”. Since the Waterloo Road star confessed that he was the brainchild behind the briny beasts experts across the country have admitted that they’ve never actually seen an eel and just assumed they exist because they’d been told that they do.
Dr Quentin Scrote, from the Department of Fisheries and Aquaculture said “Since Neil Morrissey made the claim yesterday we’ve looked into it and in all honesty nobody who works here has ever actually seen an eel. It’s starting to look highly likely that there’s simply no such thing”.
When East End, Pie and Mash shop owner, Gavin Bunty was asked where he got his jellied eels from he admitted “I’ve always just chopped up tinned pilchards and served that, I’ve been going to Billingsgate Fish Market for almost 60 years and I’ve never actually seen an eel, they always just told me they’d sold out”.
“I was starting to think there was something fishy about it” he joked.
When asked why he’d never mentioned it before, Morrissey admitted “I thought it was weird when it started to take off but after a while I just assumed that there was such a thing as an eel and I mustn’t have made it up after all”.
“It’s amazing to think that despite all the fantastic shows I’ve been in, inventing ells will probably be my greatest legacy” Morrissey mused.
When asked how pictures and references to eels have existed in books and paintings going back hundreds and hundreds of years, broadcaster and natural historian, David Attenborough said “like so many things in the briny deep, that might be one of those mysteries that we never fully understand”. 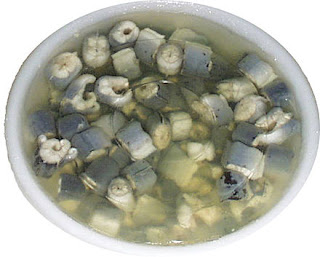