Former Spice Girl shocked to discover that she has robotic hands. 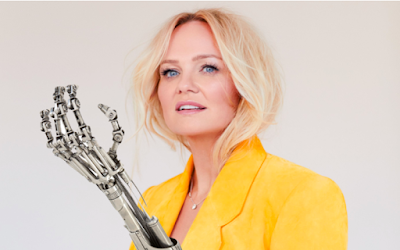 Pop-star Emma Bunton stunned fans last night after claiming that she
appears to have mechanised hands constructed from some kind of titanium alloy and has no idea how they got there.
The singer, formerly known as Baby Spice (43) revealed that she made the discovery when cutting her finger chopping a parsnip at her luxurious home in Chipping Barnett.
“I realised something wasn’t right when, instead of bleeding, the wound revealed a glimmering cross-section of shiny metal” said Bunton in an emotional Instagram video to her 1.1 million followers.
The blonde mother of two went on to reveal how she continued to remove the flesh from her right arm with a flick knife only to discover that the entire limb appears to be a cybernetic endoskeleton constructed from some kind of futuristic, triple-armoured, hyper-alloy.
And the bad news didn’t end there for the former Heart radio Dj as a tentative prick with a pin suggests that it might be that same story with her left arm.
“I couldn’t believe what I was seeing” she said through a veil of tears. “I have absolutely no recollection of getting robitic arms fitted and it just doesn’t feel like the sort of thing that you’d forget having done.”
The Spice Girl admitted that she should have known something was awry when she first noticed that she could pick up a cement mixer without even breaking a sweat.
“When we were on tour, the girls would always come to me when they needed a jar of pickled onions opening or an iron door prising off its hinges so I guess I should have known something was going on.”
Bunton went on to say that a trip to her local GP to organise an X-ray was at the very top of her to-do-list and admitted that her biggest fear is that she may discover that she is in fact a T-800 Terminator sent back through time to alter the course of history and prevent Skynet from becoming sentient and destroying all of mankind.


“It’s the sort of thing you hear about but just pray will happen to you. We’re just keeping our fingers crossed that there’s a simple explanation and it can all get sorted with a course of steroids or antibiotics” she concluded.