A DESCRIPTION
OF SOME OF
MY DREADFUL
MATES 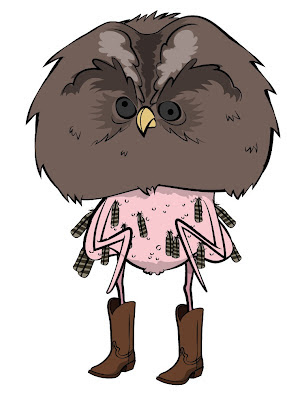 SEXY CHRIS
Well, he's an owl which means that from a distance he looks like any other owl to be honest.
To be even more precise he's a Tawny Owl which mean's he's stocky, medium-sized and he's a sort of filthy brown/grey colour.
Take a few steps closer and you'll notice that he's wearing cowboy boots and has a tattoo of Kurt Cobain on his left wing (He basically looks like a right cunt).
He's quite threadbare for an owl because his feathers haven't grown back properly after the time we got hammered on M-Cat and I dared him to pluck them all out and he almost died.
He also has a beak in the middle of his face.
He's heard people saying that owls are intelligent and he believes his own hype. At the moment he's trying to read The God Delusion by Richard Dawkins but he keeps dropping it out of his tree and his reading glasses keep falling into the canal because he doesn't have any fucking ears. It doesn't matter anyway because we all know he can't read for toffee.
He can be alright though. Sometimes he makes me laugh. A few weeks ago he dropped a grass snake onto Princess Anne's head from about 50 ft, just for a laugh. 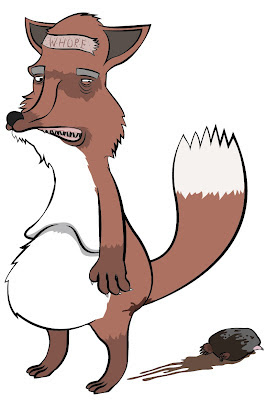 Clive is a fox. He's quite fat. He's got the word 'Whore' written on his forehead from the time Martin Clunes carved it on there with a butterfly knife. Once when he was sitting in the park a mole crawled up through the soil and went straight up his arse. He was running about panicking and I laughed so much that I was sick all over Sexy Chris. 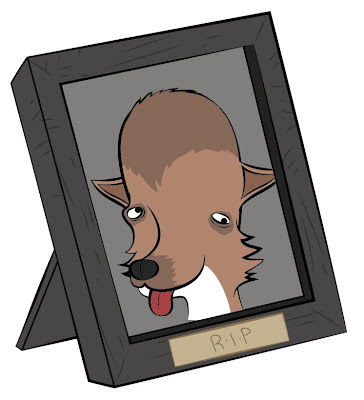 Rubbish Les had Down's Syndrome. He was my best mate but he had his head kicked in by chavs and now he's dead. 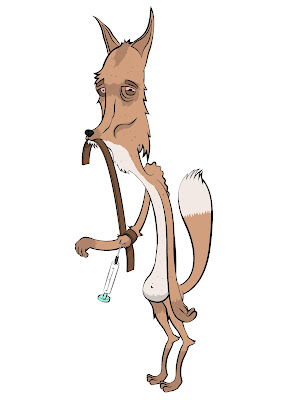 I met Double Denim David about two years ago in a bottle bank behind Costcutter where he was selling drugs to a duck called Lance Hamper*.

Dave has been doing drugs for a long time so he sort of looks skinnier than most foxes. He's got sunken cheeks which make him look like a crackhead, mainly because he is one.

He's a bit of party boy and is probably my naughtiest friend. I once watched him murder a little boy.


Other than that he's quite cool. He sometimes wears a leather jacket which he thinks makes him look like The Fonz. It doesn't though because it's got a big Kellogg's Coco Pops logo on the back. 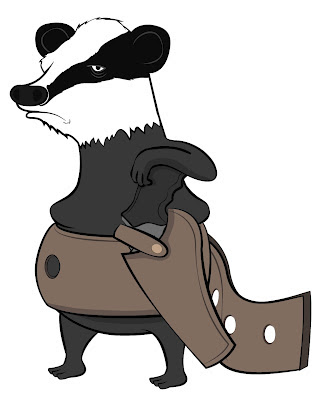 I've only known Keith Rice for a few days but he seems alright. He's a badger so obviously he looks ridiculous. Keith is quite a grumpy character. He 's pretty much constantly fucked off about the fact that the government have decided to murder him and all his mates over the coming years.

Facially he looks pretty much exactly like Gary Lineker.
He also carries a gun in a holster. 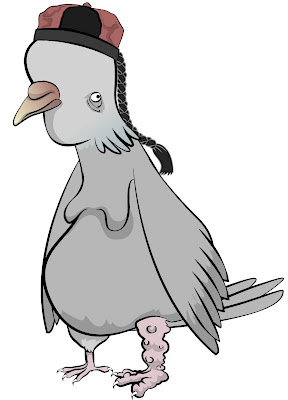 COLIN HONG
Colin is a wood pigeon. He thinks he was born in China but he wasn't. He was born in an egg. In Clapton.
He once got bummed by Ant and Dec in a tunnel.
He's got gout in one of his legs.
He sometimes wears a hat.
He's not really one of my mates to be honest. He's a fucking cock.
Email ThisBlogThis!Share to TwitterShare to FacebookShare to Pinterest
Newer Post Older Post Home