When you're an animal like me, every year's pretty much as crap as the last one. You battle to survive the Winter frosts at the start of the year, you try and get your end away in the Spring (I bummed a goose), the summer's all about sweating and eating wasps and then it's back into the bitter temperatures where you get gradually more ill and pray for sweet, sweet death. Each year is a thankless and pointless trial that's less fun than tripping over and smashing your face into the side of a van, and this one took the fucking biscuit. All things considered, 2012 will be remembered as an absolute waste of time for Great Britain. Rain clouds became such a permanent fixture that moss started growing in the sky and almost everybody got trench foot, almost nobody had a pot to piss in and the year came to a charming conclusion when it turned out that every Tom, Dick and Harry was fucking kids. Magical stuff.

THE ANNUAL BASTARD AWARD
I don't really like football. In the summer, during the World Cup, some fat dickhead in an England shirt rugby tackled me to the ground down by the canal and spray painted a George Cross onto my flanks. Also, just a few days ago, a little boy booted a football into my face and called me a ginger cunt. Football seems to generally attract bastards and you'll do very well do find a much bigger bastard than John Terry. He looks like a dog with Bell's palsy and that thing he said to Anton Ferdinand this time last year was well out of order. I called someone a 'black cunt' once but I think it was different because I was having an argument with a crow.
RUNNER UP - MARTIN CLUNES - Not really as bad as Terry. Not really. But last week Clunes did run out of his shed and kick me as hard as he could in the bollocks and then cycle off laughing on his BMX. I know it's not as bad as racism but I could totally do without that sort of nonsense to be honest.
THE  FIT AWARD

The fit award goes to Holly Willoughby. I'm told she's been on TV a lot this year. It's hard to believe that this time last year I was getting off with her in the back of a knackered van in Catford. It's a funny old world.
RUNNER UP - BUNTY HOVEN - Bunty is a right proper sexy vixen who lives down the bins. She's fit but she's a bit up her own arse. Not as up her own arse as my mate Ian Poultry mind who put his head up his own arse for a bet a few months ago and died. What an idiot. Haha. 10 /10.

THE WORST  LOOK  AWARD
I spend quite a lot of time watching TV in my mate Cwis Packham's bungalow at the weekends so I've got a fairly good idea about what's going on for a fox. I sit next to him on the sofa and he feeds me Twiglets and picks all the lice out of my revolting coat and he keeps trying to get off with me. The other day Cwis was watching X-Factor and a bloke came on called Rylan who couldn't sing for toffee and looked like he'd travelled back in time on a mission to open the world's gayest bar. He looked like he was wearing a latex George Michael mask turned inside out and when he started talking he sounded so thick that I could hardly believe that he was still alive. In one part of the programme he began weeping and his face reminded me of the time that my mate Keith Rice stood on a frog and it's head exploded.
RUNNER UP : SEXY CHRIS - Sexy Chris is my mate but he looks like a proper idiot. This year he got both of his ears pierced and got a a tattoo of Kurt Cobain which looks crap mainly because he's a fucking tawny owl. (He also owns about fourteen pairs of cowboy boots). Sometimes when i think about how much I hate Sexy Chris it makes me go a bit giddy and I have to have a little sit down.

THE GOLDEN  COCK  AWARD
Rupert Murdoch, David Cameron and John Terry would have all had a shot at this in any other year if it wasn't for Sir Jimmy Saville who pinched the title from beyond the grave for doing stuff that you wouldn't even expect from me, and I can be a right handful. Very bad man. 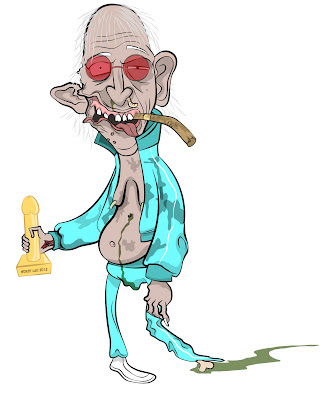 RUNNER UP - Don't need one really. There's a squirrel I know called Clive Salad who's a bit of a prick but...but he's not really in the same ball park to be fair.
THE  GREATEST  THREAT  TO  LIFE  AWARD


I think I'm going to give this award to David Cameron based on the fat that he's trying to piss about with the NHS. I love the NHS because it's where I get most of my dinners. The other day I got into a bin behind St Thomas' Hospital and found a bag full of human hands. My mate Vile Clive put one on his head and pretended to be a hen. He thought it was really funny but it wasn't.

Cameron also deserves the award for creeping out into St James' Park in the middle of the night and ensnaring animals in a sort of web so that he can feast on their blood. I once saw him eat an entire pelican in one mouthful by dislocating his jaw like some sort of podgy-faced anaconda. My mate Keith Rice says that he's got two pairs of a eyelids like a crocodile. He's a proper fucked up guy.
THE  LIFETIME TRIBUTE AWARD
I'd like to take a minute to pay respect to a man who dedicated his life to nature and sadly passed away in September of this year. If more people cared about animals as much as Terry Nutkins then this world would be a better place to live for humans and animals alike. I know me and Nutkins had our ups and downs (My mate Edal Walsh took a couple of his fingers off and it caused problems) but he was a top lad.
Terence Paul "Terry" Nutkins (12 August 1946 – 6 September 2012)
Email ThisBlogThis!Share to TwitterShare to FacebookShare to Pinterest
Newer Post Older Post Home