STYLE TIPS
OR: HOW NOT TO LOOK AS SHIT AS MY MATE MALCOLM VARNISH
(AN OLD FROG)

It's safe to say that no one looks their best during the winter. You probably spend most of the frosty months sitting on the sofa shovelling biscuits into your big fat face because you don't want to go outside, and you can't tell that you're slowly turning into a rotund leviathan because you're wearing so many layers of clothing, all of which look shit because they get covered in rain and mud every time you pop out to the shops to get some more biscuits. It's a vicious cycle designed to make you look like a fat tramp. Have a look at your own belly now, I bet you look like a frog that's drowned in a watering can don't you? Yes! You do!
It's the same every year, but this year's been particularly bad owing to the fact that we're currently in month number 18 of winter. It never ends. I've been wet for so long now that the iron in my blood has started to go rusty. Every time it pumps through my cold black heart it feels like I'm being stabbed in the chest by a billion tiny knives. It's fucking bollocks. If it isn't wet then it's bloody freezing as well. The other day my mate Sexy Chris's eyes froze over which actually ended up being quite funny because he got run over by an ambulance. I laughed so hard that I passed out and woke up in a cage at an RSPCA rescue centre.
Anyway, where was I? With any luck it'll be spring soon which is the ideal time for you to get your shit together if you want to avoid spending the entire summer watching people vomiting all over the barbecue every time you turn up to a social event.
I'm probably not really in any position to give style advice considering I look like a really old dog that's died of SARS but I have got some pretty influential connections (ducks, rats, wasps etc) so put the biscuits down and pay attention!

IF YOU'VE GOT IT FLAUNT IT

Take some time to consider what your best features are. If you're not sure then don't be afraid to ask someone (a friend, a wife, a neighbour's wife). Cwis Packham from TV's Springwatch is always telling me that I've got a "great arse". Thanks very much. It's nice to receive a compliment. Yesterday morning I overheard a couple of wood pigeons say "he's still got it" as I minced up the canal. Unfortunately on that occasion they were talking about chlamydia.
It's always a shame when someone doesn't capitalise on an asset that most people would kill for. I, for instance, know a badger (Glen Trinket) who's got a great big penis that he keeps wrapped up in a Sainsbury's bag for life. What a shame.


IF YOU'VE NOT GOT IT THEN DON'T FLAUNT IT

Take my testicles for instance. I literally can't believe that they haven't fallen off yet. My mate Double Denim David reckons they look like "a couple of burnt walnuts that have been regurgitated by a poorly horse". I'm not going to look like a very suave customer flashing those bad boys around willy nilly. Keep them under wraps. 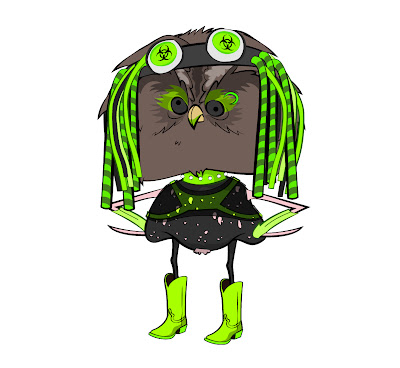 DON'T BE TOO FADDY

The problem with trends is that more often than not they're going to make you look like a right fucking berk at some point in the future. Worse still are people who wear failed hallmarks of fashion in a retrospectively ironic context. Knocking about Dalston and Old Street with a mullet, handlebar moustache, Backstreet Boys T-shirt and Winklepickers is guaranteed to make you look like a cunt of such dizzying magnitude that it doesn't even bear thinking about. Take my mate Sexy Chris for instance, his tragic quest to remain on the cutting edge has resulted in a litany of fashion crimes in the past. Sexy Chris has recently become a 'cyber goth' which means that he's currently clad head to toe in PVC and ultraviolet piercings. When you bear in mind that he's a tawny owl then you should  get some idea just quite how much of a fucking plum he looks at the moment. A bigger bell end than Sexy Chris you would do very, very well to find.

NOT TOO FAT, NOT TOO THIN

This pretty much boils down to smoking the right amount of crack. Don't smoke enough and you'll start to look like a bit of a porker, smoke too much and your face will start collapsing in on itself like a neutron star and you'll wind up looking like Skeletor.

Tattoos are ten a penny these days. People spend more time choosing what kind of bread they want in the supermarket than they do choosing a piece of body art. With that in mind you might as well go absolutely mental and tat your face up whilst it's in vogue. A few weeks ago I was in the park with my mate Invisible Richard and we did so much M-Cat that I convinced him to get the Uncle Ben's Rice logo tattooed in the middle of his forehead. It was brilliant. It's one of the funniest things I've ever seen anyone do. It took him about forty or fifty seconds before he bitterly regretted his decision and took his own life by jumping in front of a Eurostar that was pulling out of King's Cross Station. It still makes me chuckle when I think about it now.