HOW TO ACT LIKE A RIGHT BELLEND
this summer

The sun's finally made an appearance for the first time in about two years which is good because I've started to cultivate a large wad of moss around my undercarriage. Hopefully now there will be a chance to dry out and maybe even have a nice time before we plunge back into the shitty eternity of winter. Obviously it won't last more than a couple of days and then billions of gallons of water will fall out of the sky again until we all either drown or commit suicide, so I suppose we should appreciate it while it lasts.
Here are some things you can do to enjoy the nice weather and spoil it for everyone else. 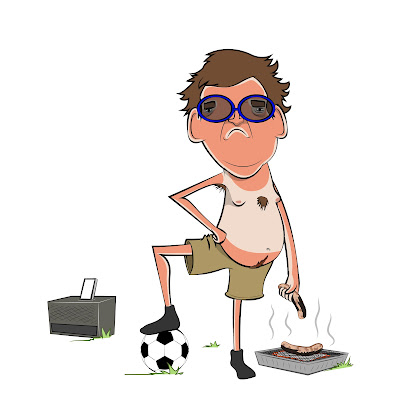 1 - BBQ IN THE PARK
One of the most popular summer activities is a BBQ in the park with friends and it's really easy to act like a right prick whilst you're doing it.
You should start the day by drinking Kestrel Super Strength Lager at about 10:30am. At about midday pile into a park that's already teeming with people and find a small patch of dirt. Once you've dropped all your shit then it's time to turn on your music (make sure your choice of music is absolutely abysmal - how about a spot of gabber techno?)
Fire up the BBQ, remove your shirt and start shouting.
Boot a football around making sure that it mainly hits women and children.
Do this for about 10 hours.
By the time the sun goes down you should be bright red. You should look like a skinned pig. The combination of undercooked sausages, shitty beer and sunburn will more than likely have transformed you into an aggressive maniac and everyone within a 100 metre radius will probably think you're a cunt. Good job.


2 - DRIVE AROUND
When the sun comes out it's important to spend as much time as you can driving around in your car, because what's the point in having a car if strangers can't see you driving around in it? The best thing to do is to drive around the local area for absolutely no reason at all.
Remove your shirt and start shouting.
Wind down the windows and blast terribly average pop music out of them at full volume. You might look like a hard arse but listening to something like JLS or Luther Vandross will ensure that you look like a fucking berk. Make sure that you have an expression of undeserved smugness smeared across your stupid face at all times. People will die of jealously when they see that you've got your very own Renault Clio.

3 - DRESS LIKE A KNOB
This should be fairly straight forward. Most high street shops will try their level best to make you look like a right twonk. Wander round. Check them all out.
My mate Sexy Chris has started wearing sandals and denim shorts. Sandals and denim shorts is a pretty good good look if you're not a tawny owl who lives inside a fuse box in Hoxton. I hate Sexy Chris so much that it makes my eyes bleed.

4 - GO TO THE SEASIDE
Every single year there will be a very small heat-wave that crops up on a weekend. Usually the best thing to do is to hop on a train to somewhere like Brighton or Camber Sands with every single other cunt from London and find a beach. Obviously when you get there you'll be bitterly disappointed that the whole experience doesn't re-ignite all your memories of going to Sri Lanka in 2003 like you thought it might. Well we're in a recession so it's the best you can do. No need to try and act like a bell end in this scenario because you've already done it by going in the first place.
(I once went to the British coast by accident. I got on a train at Charing Cross and it went all the way to Hastings. It's one of the worst places I've ever been. The entire place was governed by seagulls and al the people looked like stone gargoyles that had crawled out of the roof of a cathedral. Dreadful.)

5- TALK ABOUT YOUR HAY FEVER
Start sniffing and sneezing and chatting about pollen to everyone every five minutes. That'll be fascinating for everyone. Nobody gives a fuck. I hope it fucking kills you.
Email ThisBlogThis!Share to TwitterShare to FacebookShare to Pinterest
Newer Post Older Post Home