AN INTERVIEW
FOR
THE
VELVET
ONION


* So Gus The Fox, you've sort of taken on the mantle of Most Wicked Vulpine in North East London following the demise of The Crack Fox. What qualities do you bring to this role?

I wouldn't really describe myself as the most wicked vulpine in North East London. Most of my mates are just as bad as me if not worse. My mate William Plunge is particularly naughty. I remember once we went for a walk up the canal and I said it might be funny to untie all the canal boats so that they floated away. William agreed but thought it would be funnier to murder all the swans using his penis. When he finished he strung them all up on an elaborate system of winches and pulleys and used them as puppets to perform a reenactment of Schindler's List with added racism. He received a Laurence Olivier Award for an 'Outstanding Contribution to British Theatre' but had it rescinded when everybody found out that he spends his weekends sneaking into people's houses and tattooing the faces of famous serial killers onto the chests of new born babies. He's a cheeky so and so.

I used to know Jermome (the crack fox). He came over to my disgusting pit a couple of times. One time we got into a heated argument about which company produced the best hinges for industrial wheelie bins. Jerome got so angry that he shaved all my fur off and embroidered it into a tapestry inspired by the poster for 'Jurassic Park 2:The Lost World'. 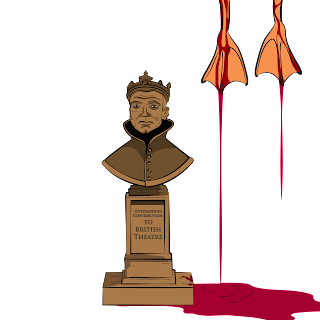 * Your predecessor had plans for world domination. Is this something you can get behind?

Not really. I think if you smoke that much crack then at some point you'll start travelling inside your own mind and acting like an arsehole. I'm not really that ambitious really, I only care about a few things. As long as I'm not being bummed up against a skip by a gang of bin men and I can find something better to eat other than my own testicles than I'm usually pretty content (unfortunately both those things happen on an unbelievably regular basis).  I've got a book coming out so I've already achieved more than most foxes. Trying to catch a break when you're a fox isn't easy because everyone thinks you're a cunt. My dad murdered my mum in an argument over a parsnip and then my dad was shot and turned into a really posh hat. Life's just really difficult when you're a fox. I think the day that a fox rules the world is still pretty far away. I doubt I'll see it in my lifetime.


* Are you any relation to Vince Fox from Mongrels? He'd perhaps challenge your authority.

He's a puppet. Next

* As they say on the street, do you think you could 'ave 'im? He's a bit like the Jack Bauer of east end foxes, after all... all that shouting, swearing and breaking people's necks...

Yeah well he's a puppet so I could tear him to pieces like an old shoe. When you're a fox you have to pick and choose your fights carefully. Everyone thinks foxes are a menace to humans but there aren't very many humans that I could 'have' in a fight. I once beat up a blind guy but that's about it. usually it's me on the receiving end of a knuckle supper. The other day I was fingering a badger behind WH Smiths when Sue Barker from 'A Question of Sport' ran up behind me, pinned me against the wall and gave me such a ferocious Chinese burn that my paws burst into flames. She just cracked open another can of Kestrel Super Strength and walked away laughing. that sort of thing happens more often than you'd think. I usually take my frustration out on smaller animals. I guess that makes me a bully but that's just the law of the urban jungle. Last week I super glued a frog onto a coot's back. That one backfired a bit actually because they got on like a house on fire and apparently they've set up a really successful Internet dating agency. Apparently they're worth over 2 billion pounds now. Annoying.

* How did you end up meeting Noel Fielding, and getting him to write the foreword for your book?

I met Noel a couple of years ago in his back garden. I used to go there and lick moss off of his trampoline and he'd come out in the middle of the night in his Thomas The Tank Engine pyjamas when he couldn't sleep. He used to dig up the lawn and make sculptures out of the soil. I'd chat to him whilst he constructed the earthy dioramas. He'd then take photographs of them with his polaroid camera and get me to deliver them to all the people who used to work on Blue Peter such as Tim Vincent and Diane-Louise Jordan. One time we were went out for nice picnic but we got confused halfway through and forgot what we were doing. We ended up setting fire to a petrol station and daring each other to ride our bikes through the flaming inferno. We were arrested and spent several years in jail. It was during this period that he agreed to write in my book. Unfortunately no contract was ever drawn up and now Noel's suing me for everything I own (my box of wasps and both of my Twix wrappers) 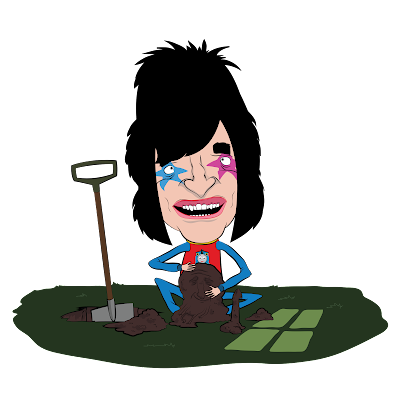 * Speaking of that book, what's it all about, Gus?

It's just a collection of the things that I've found and some of my thoughts, ideas and observations. There are a lot of lists in it because I have very strong OCD which you wouldn't really expect from someone whose bowel movements and home cooking aren't mutually exclusive concepts.  I've let some of my mates like Double Denim David, Colin Hong and Sexy Chris put some of their gibberish in there as well. My mate Keith Rice (a grumpy badger) has written an article about his favourite types of soil and, I must say, it's one of the most boring things that's ever been printed in a book.


* Does the book lift the bin-lid somewhat?

* Chris Packham's a big admirer of your work. Have you thought about wangling a slot on Springwatch?

Me and Cwis have got a funny relationship because he's usually trying to kill me. A few weeks ago I went over to his house to watch some of his vast collection of niche pornography. We were having a nice night until he shot me in the neck with a tranquiliser gun and bundled me into a crate. I woke up a couple of days later under a bridge in Macclesfield and realised that the dickhead had spray painted me like a friesian cow and strapped an enormous bell round my neck. It took me four weeks to get back to London and it was one of the worst four weeks of my life. At one point I got milked by  a gypsy in Toddington Service Station. It struck me as an awful lot of effort to go to for something that wasn't even that funny. I wouldn't go on Springwatch unless Cwis could wangle me a date with Strachan.

* You're riding the crest of fox popularity which hasn't been this big since Basil Brush. Can it last?

* For all the fox lovers, there are lots of detractors. What do you say to those who brand foxes as dangerous animals?

That's bullshit. More humans probably get hurt and killed each year by bees but I've never seen a gang of people and dogs kicking the shit out of a bee hive whilst they blow a little trumpet on the back of a horse. If you ask me, people just hate us because we fucking stink of arse. If we made honey instead of making people's driveway smell like the end of the world then everyone would love foxes. Having said that I would love to eat David Cameron's fingers. I would chew my own penis off for the chance to munch down that cunt's filthy digits.

* The one complaint I seem to keep hearing about foxes is that your lot do seem to enjoy shitting in people's gardens. Is there a way to prevent this?

Cover your lawn with bacon


* Finally, I have to ask. What DOES the fox really say?
We've got a lot to say. I'm in the middle of writing a really long poem about a wasp with really fat legs but it's not ready yet. Maybe next time.