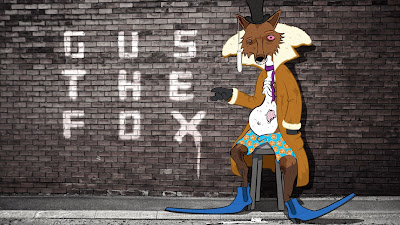 I don't really get fashion, I'll be honest with you. It seems to me that if Rhianna were to cut off both of her hands with a hedge trimmer and tweet a picture of the results then it wouldn't be long before there were queues of shrieking teenagers spewing out from ever branch of Homebase in the country with bloody stumps.
It's not, as you might think, because I'm a fox that I don't give a shit about what I'm wearing though. Unfortunately this fashion obsessed culture has taken the animal kingdom by storm and now we've found ourselves in a situation where you can't even go for a nice walk down by the canal without seeing an eel in a pair of aviators or a bunch of swans wearingjeggings and smoking Vogue cigarettes behind the bins.
Millions of years ago, when you lot were a bunch of cave dwelling Neanderthals, what you wore was inconsequential to your status within the tribe. The fact that Gary's mammoth-skin loincloth was all threadbare and covered in jizz didn't necessarily exclude him from the clique.
With the invention of consumerism came a greater divide between the have and have-nots and what better way to punctuate your own success and differentiate yourself from the filthy proles than by mincing about in a wig and frilly tunic like the world's biggest cunt.
Before that, everyone was equal, and that's how it was for animals until comparatively recently, but life isn't that simple anymore. The other night I had the shit kicked out of me by a piss-head in a car park because I wasn't wearing a 'smart shirt' which struck me as a little bit out of order considering I wasn't wearing any clothes at all and the piss-head was Sir David Attenborough.

My mate Sexy Chris (a bald owl) told me that I should get a wardrobe together, visit a few shops and talk to some influential fashionistas. His idea inspired me. It inspired me to push slugs into his eyes and then set him on fire which I did immediately.
The next day I received a call from Topman asking me to write a piece about fashion. I apologised to Sexy Chris' charred corpse, booted it into underneath a Renault Megane hatchback and set out on my quest.

Thursday 7:48am
I went to talk to my friend Glen Shoe (a retarded mole). He'd once spent some time at the bottom of Stella McCartney's garden, eating all her worms and posting racist poetry through her letterbox. I wanted to talk to Glen about hats and which type he thinks I should think about sticking on my bonce. Glen claimed that there was no such thing as 'hats' and they were simply a rumour started by Phillip Schofield in the 1990s for a laugh.
I thanked Glen for his time and continued with my journey.

Thursday 12:11pm
I walked through Dalston contemplating what look it was I was going for. I knew that, being a fox, wearing any clothes at all was going to result in me looking like a right bell-end, but how much of a bell end was still any one's guess. It was exciting.
Seconds later I bumped into a dog wearing a donkey jacket. This was ideal. He looked like a dickhead of such incredible magnitude that it actually made me start crying. We got chatting and he told me his name was Dennis Yeast. He told me that he designed the blades for lawnmowers and had recently been offered a great new job at Yamaha. He talked about lawnmower blades for about 45 minutes. I killed him, fucked him and then ate him.

Friday 4:52am
Sporting my new jacket I set off to chat with some moths about trousers. They told me everything they knew about trousers which took about 4 or 5 seconds. Afterwards their was an awkward silence and I got confused and ended up accidentally getting married to a moth called Magnetic Dennis. A couple of hours later I filed for divorce, popped on a pair of Billabong surf shorts and fucked off back to my filthy dwellings for a long hard think about my life.

Friday 8:52am
I visited my friend Keith Rice (a grumpy badger) to find out if he knew anything about shoes. He was adamant that extremely long and pointy winkle pickers was the only way to go despite my reservations about how good they would look on a fox wearing Hawaiian shorts and a donkey jacket. He insisted  that I looked exactly like Pete Doherty. He admitted that he didn't know who Pete Doherty and we parted ways.

Friday 9:32am
I was on my way to the photo shoot when I bumped into my mate Martin Clunes. He told me that I needed some accessories to "bring the outfit together". He stapled a tampon to my ear, force-fed me an entire jar of pickled eggs and then punched me in the stomach so hard that all of my claws fell out.

And so this is the result of my journey into fashion. An outfit that divides opinion. Some say it's 'crap' whereas others have described it as 'embarrassingly shit'. My mate James The Haemophiliac Wood Pigeon said that he hated it so much that his beak burst into flames.
Well, it might not be everyone's cup of tea but it's mine, I created it and in a funny sort of way I'm proud. You might not see it on the high street any time soon but maybe that's not such a bad thing. In a world where everything looks the same perhaps it's still up to pioneers like me to create something truly unique.

(On the way home Gus was laughed at by a gang of ducks and then beaten up by a gypsy. He no longer wears his outfit)