THE BOOK TOUR
a DIARY
I was nervous about embarking on the promotional book tour for several reasons. Firstly, the book that I'm promoting, is rubbish. I suppose a lot of foxes don't even get around to writing a book, so in that respect I should give myself a pat on the back, but even when you consider that, it's still very poor. It's the sort of thing that you'd expect to find in a psychiatric hospital hidden under a piss stained mattress and stuck together with wasps. It's the type of thing that might belong to a patient who spends their time writing verses from the Bible on the walls in shit and eating their own hair and then picking up a pen and feverishly jotting down their thoughts and revelations in a diary before returning to the task in hand. I don't think it's going to be nominated for a Pulitzer Prize.
I was also sceptical about how well the book tour would go since I'd hired my mate James The Haemophiliac Wood Pigeon to be my manager. There's never been an example of a wood pigeon with great admin skills and unfortunately James is no exception. Much like most of the animals I knock about with, James the Haemophiliac Wood Pigeon is an idiot of an almost incomprehensible magnitude. Just before we were due to set off he'd climbed inside a carton of Um Bongo because he was "following a slug" and now he was trapped wearing the drinks container like a sort of cardboard corset and leaving the pair of us looking like the worlds most idiotic entourage.
At 2am I gave up trying to free james. I told him he was a useless cunt and went to bed. Tomorrow was a big day.
I spent the night dreaming about a wood louse who could run faster than the speed of light. I kept waking up with an erection. 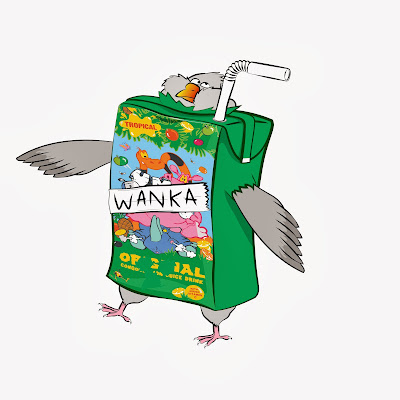 I woke up and yawned. One of my bollocks fell off and rolled into the canal where it was gobbled up by a trout. I didn't need this shit. The day was off to a bad start.
I asked James where we were heading and he told me we were doing a book signing on an industrial estate in High Barnet. When we got to our destination James remembered that he hadn't actually booked anything. I punched him so hard that all my claws fell out. Whilst I was sulking I found a skip that was full of bags of meat which made me feel a bit better.
On our way back to London I got beaten up in a tunnel by a gypsy.
Went to bed in a bad mood.

TUESDAY 29th OCTOBER
In the morning we went to The Guardian for an interview. The guy interviewing me spent an hour asking me if I'd ever seen a dog. I told him that I had seen many dogs but he kept repeating the question over and over again. He may have been suffering some kind of breakdown. The interview was a shocker and didn't get printed.
In the afternoon the Sunday Telegraph did an interview with me about 'My Perfect Weekend'. I told them what I liked doing to hens on the weekend. One lady was sick and fell off her chair, the other ladies started crying, throwing stuff at me and calling me every name under the sun (the word 'cunt' made quite a few appearances for example).
On my way home I popped in to see the publishers. They told me that so far we'd sold three copies of the book. There was a terrible atmosphere in the office and everyone was looking at me like I'd just curled one out in the middle of the floor (which to be honest I had).
I went home feeling deflated.
I was woken up in the middle of the night by Bruce Forsyth flicking coppers down my fox hole. One of them knocked over my jar of twigs and fluff which was annoying.

WEDNESDAY 30th OCTOBER
Got up and headed over to the Cheltenham Literary Festival where I was signing copies of my book. Unfortunately they set me up next to Jeremy Paxman who was promoting his new history book. Paxman spent the whole morning passing me little notes under the desk which featured crude drawings of naked women that he'd drawn with his biro. Eventually we got caught by the organisers and were both asked to leave.
I signed one copy of my book for a man in a wheelchair.
In the afternoon I was on 6 music. Lauren Laverne kept interrupting me and telling the listeners that I "smelled like an old shoe that had just fallen out of horse's arse". I managed to talk about the book briefly but Lauren spent most of the interview talking to James about his Um Bongo waistcoat. James was whisked away in a taxi and photographed for next months GQ Magazine. Apparently they're putting him on the front cover.
I fired James in the evening.

THURSDAY 31st OCTOBER
Had the day off. Tried to get some writing done but got confused halfway through and ended up having sex with a swan.
I tried to concentrate and ended up writing a 10'000 word poem about a dog with psoriasis. I sent it to my agent who said it was the worst thing he'd ever read. He said it was so bad that it gave him a nosebleed.
Went to bed feeling like I'd wasted the day.

FRIDAY 1st NOVEMBER
Did an interview for an industry magazine aimed at industrial wheelie bin manufacturers. It went really well. It was a really good and enlightening interview and I was on cloud nine before I found out that it has a readership of under 5 people in the UK.
I went to Waterstones to speak to the manager and find out if the books were selling well. He told me that there was a copy in the staff toilet. I told him that it was heartening to know that, even if no one else did, the employees in a book shop had taken to it and chosen to peruse it during their toilet breaks. The manager corrected me and told me that it was actually 'inside the toilet' and that everyone thought it was so bad that they were actually pissing on it whenever they had the chance. I wondered if Zadie Smith had ever had that problem and headed off.

SATURDAY 2nd NOVEMBER
My mate Sexy Chris (an owl) came over in the morning to gloat about the fact that the book he'd written, about a Slug called Dave Yeast, had already been nominated for next year's Booker Prize. I got so angry that I fainted and fell into the canal and got washed down a weir.
Later on I wrote an article about twigs for Time Out which they didn't run.
After that I went on BBC 5Live to talk about my book and answer questions from people who were calling in. Every single person who phoned in was a van driver who wanted to cave my head in with a spade because of some sort of bullshit that the Daily Mail had printed that day. The producer thought it would be best if I went home before a baying mob turned up at the studio. On the plus side I did get to mention the book and Richard Bacon described it as "not totally shit".
Today had been better than most.
I went some and celebrate by flicking blackcurrants at a frog.

SUNDAY 3rd NOVEMBER
Was invited to promote the book on 'Sunday Brunch' on Channel 4 but decided that I had better things to do than lower myself to that level.
I spent the rest of the day growling at a bin.