Most of us know very little about our family tree much beyond our great grandparents (my great granddad was shot in the face and turned into a posh hat for some rich cunt), so it’s amazing to realise that the direct bloodline of a thoroughbred racehorse can be traced back through tens of generations.
There are thousands of these stupid, gangly, bastards born every year in Britain and each one can trace their ancestry back to just three horses.
Famous success stories like Nijinsky, Red Rum, Seabiscuit and Black Beauty may have benefited from centuries of incest and inbreeding but others haven’t been so lucky. Here, in a world first, we take a look at some of the poor fuckers who didn’t cut the mustard and find fame and fortune on the track. 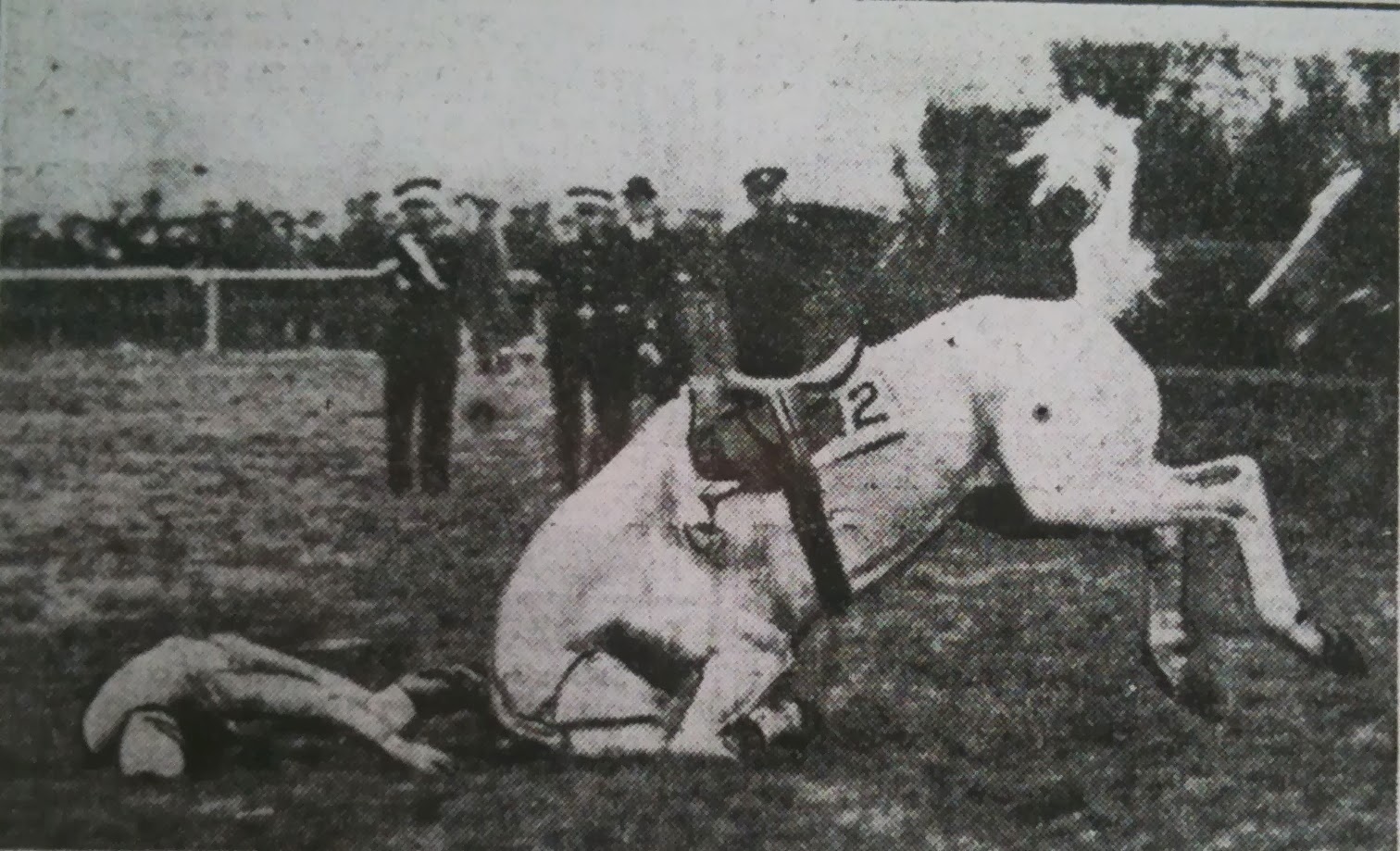 CURL ONE OUT - 1780
Curl One Out was foaled in about 1780 and was tipped for the top after receiving a huge amount of investment from the Earl of Kent. However, things didn’t go to plan and it turned out that Curl One Out was a fucking idiot. In his first professional race he began ‘burrowing downwards’ at the starting pistol like some sort of gigantic, lanky, hamster. Three hours later, well after the end of the race, Curl One Out was at the bottom of a 30ft pit and continuing to dig his way towards the core of the earth and tragically, his jockey, Fergus O’Connel, had become trapped under a large pile of dirt and had sadly perished. According to eyewitnesses, at about 2am Curl One Out burst into flames and exploded like a bag of ham. No one knows why this happened but it cast a black cloud over the sport for many years to come.
(A commemorative statue of Fergus O’Connell can be found at the National Horse Racing Museum, behind the bins)


BULIMIC PHIL - 1800
Bulimic Phil came last in every race he ever entered. Some critics said it was because his jockey, Brian Stacey, was blind and had a morbid fear of horses whereas others reckoned that the problem was with the horse’s penis which was over 7.5 ft in length and weighed as much as a fully grown nun. He was, however, immortalised in a series of explicit paintings by equine portrait artist, George Stubbs.
Either way, he was fucking rubbish.


UNCLE HOOVES THE CARPET HORSE - 1814
Uncle Hooves The Carpet Horse was owned by flamboyant and eccentric horse breeder, Fabrizio Zodiak, who insisted that the best way to produce a winning thoroughbred was to raise it almost exactly like you would a human child.
Uncle Hooves… was given his own bedroom in the house as well as toys, clothes and even a sort of giant tricycle which he would ride around the vast estate like something from a particularly nasty, opium fuelled, nightmare.
Zodiak flew in the face of reason (and chronological, factual accuracy) by feeding the horse roast beef, gammon and Pop Tarts, despite the fact that Pop Tarts wouldn’t be invented for another 150 years.
Convinced that his plan would work (despite not testing it once) Zodiak put his entire estate on Uncle Hooves The Carpet Horse winning his debut outing at Cheltenham. In the first 3 seconds of the race Uncle Hooves… broke all four of his legs and died in the middle of the track like an old shoe.
Fabrizio Zodiak spent the rest of his life working as a male prostitute in East London.


THE MIGHTY KING - 1857
THE MIGHTY KING was infamously disqualified from the 1857 Grand National after it was discovered that he was actually a donkey from a local farm wearing a horse costume made from muslin and suede. As far as plans to cheat the system go, it has to be up there as one of the worst. When the owner and trainer, Gavin Plough, was asked why he hadn’t put his efforts into creating a costume for a racehorse so that it might win a donkey derby he replied by chopping his own hands off and booting them into a nearby pond and saying the word “fiddlesticks” over and over again until he was arrested.
In court he was accused of ‘putting a donkey in a funny costume’; a crime, which, at the time, was punishable by death.
In June, Gavin Plough was hung, drawn and quartered.


CAPTAIN SATAN – 1939
Two heads are better than one? Well not for Captain Satan, the first two headed, Siamese twin, racehorse; thought to be a result of his parents being fed on a diet of uranium as opposed to hay. He never finished a race let alone won one, choosing instead to wander slowly into the crowd every time he heard the starting pistol, like some kind of mutant, bovine imbecile. He would routinely terrify spectators at every event inspiring them to fire their muskets at the beast and thrash him with their canes. Captain Satan died in an aeroplane crash in 1959 along with Buddy Holly, The Big Bopper and ‘La Bamba’ star, Ritchie Valens.
Email ThisBlogThis!Share to TwitterShare to FacebookShare to Pinterest
Newer Post Older Post Home