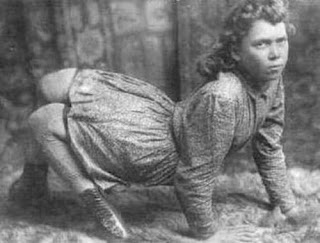 Called 'Camel Girl' because of the way her legs bent backwards apparently. She worked in a circus in Tennessee around about 1886.
I think unless you've got a hump on your back then you shouldn't really be messing about with the word camel. I'd probably have gone with 'Labrador Girl' or 'Crab Legs' or something like that.
She's got a face like a smacked arse but I suppose you would as well if you had to get about on your hands in the late 18 hundreds when everyone was still luzzing buckets of their own tod out onto the pavement.
Imagine her crawling into your window at night. That would be properly shit wouldn't it? 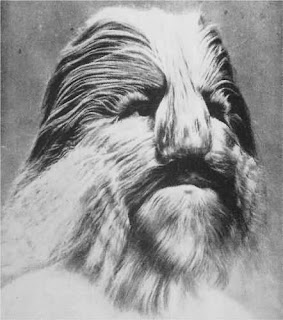 My first thought here is, why's he bothering to comb it? In terms of looking good and impressing the ladies, combing your own nose falls very firmly into the category of pissing in the wind.
His Mum fucked him off when he was baby apparently so he joined the circus in England and New York in the 1890s. Apparently he was a very well educated and gentle man, despite looking like a vision you might have if you inserted an entire sheet of LSD into your own eyeballs and broke into Sesame Street at night with your next door neighbour's dog. 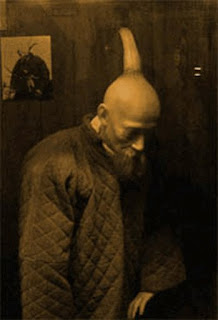 It can't be a coincidence that his given name is 'Wang' can it? I've got to be honest that if I had a kid with a massive erect penis sticking out of his head then I'd probably go with something like that as well for a name. I don't know why they've bothered giving him the 'unicorn' thing as a nickname. Wang does the job just fine.
I showed this picture to Martin Clunes and he said he'd like to rub baby oil over the horn thing and then try to squeeze a lemon over the bell end bit at the top. Honestly don't know what the fuck is wrong with that man. 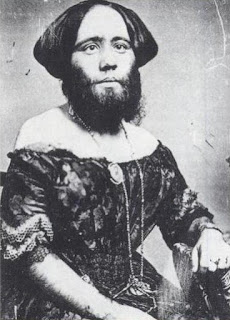 Fucking hell. Look at this bong-eyed bombshell. She's got it all going on. Brave topping it all off with 90's curtains as well. She looks like what might happen if you poured a pint of hot piss into one of those crime, photo-fit, computers and it spazzed out and came up with this.
I know you've got to be careful these days about gender issues but there's absolutely no fucking way this is a woman. 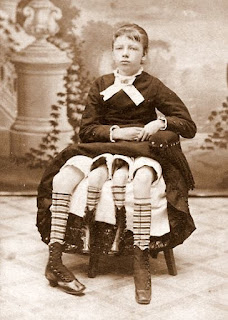 Absorbed her twin in the womb and ended up with two little legs sticking out of her bits. From the twin's point of view it doesn't get much worse than that. Anyway, she joined a circus and made an absolute killing. The only thing you really need to know about her other than the fact she's got fanny legs is that she had 5 kids. 5 fucking kids. Her husband must have been absolutely insane. As soon as you display any interest in having sex with a pair of withered legs that are sticking out of someone's vagina I reckon you need to be locked up ASAP in my book. 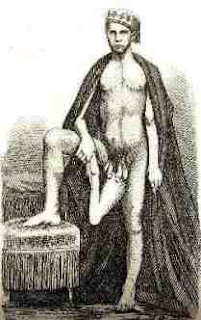 Unlike the others on the list Juan didn't want to join a circus which properly pissed them all off because they'd have been dining out for fucking years on the mental shit that was going on with his downstairs mixup.
So he had two wangers sitting there and three ball bags and then God thought "actually I might stick another little leg down there as well" as if  it wasn't all bonkers enough.
He's basically a batshit crazy, sex machine man, and he knew it. His extra knacker sacks meant he could just keep going and apparently he once had it off with a French sideshow entertainer called Blanche Dumas who also had an extra leg and shit loads of  cock sockets. If anyone had filmed that shit it'd make David Cronenberg look like fucking Beatrix Potter

Born in Milton Kenyes in 1833, over 100 years before Milton Keynes even existed, the second son of Ernie and Philomena Posnet, Edward  was born a perfectly normal little boy apart from the fact that he had a fish tail, the face of a demon and a massive, pendulous pair of tits. By the age of 6, he spent much of  his life swimming around the local waterways and feasting on coots, mallards and kingfishers, which he would catch using a Supersoaker 5000 that he'd modified to fire poisoned darts. He stopped going to school at the age of about 10 because he would lick the other children with his leathery tongue and whisper predictions of their impending deaths into their ears when the teacher wasn't looking. He was never wrong and many of the children did indeed take their own lives almost exactly to the moment that Edward had predicted. Edward was also a star striker on the school football team although details about this are sketchy and presumably not at all true.
Edward eventually joined a circus where he was killed, pickled and displayed in an oak display case. He can still be seen on display in the Milton Keynes Central Station branch of Pizza Express and rumour has it that if you touch his nipple and make a wish then you'll disappear for a few seconds before reappearing as a screaming old man and bursting into a cloud of dust. In 2010 this was proved to be true and Pizza Express have since promised to keep a closer eye on their customers interfering with the wall-mounted, fossilised, abomination to God. 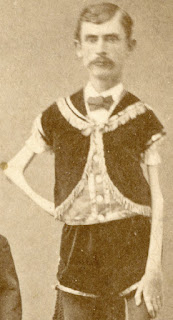 Obviously we've got Victoria Beckham these days so this isn't that amazing, but back in 1841 this was quite something. Apparently normal until twelve then all his fat muscles just fucked off. A real kick in the teeth for anyone who doesn't want to have to live in a Victorian Circus and then die. Most people I'd have thought. 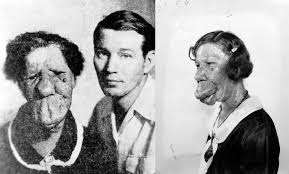 She doesn't really look like a mule. I honestly don't know if you can be more offensive than that to a horse. Me and my mate Simon Famish (a badger) once saw a horse that looked a bit like this I suppose, but that was because Simon had just booted a wasp's nest into the cunt's face because the horse had kept saying that badgers all had fat arses because they let farmers bum them in exchange for biscuits. In Simon's case this was in fact true but the horse should have known when to leave it.
Anyway, Grace had kids as well which is mad. I don't want to be out of order so I'm going to give her a compliment sandwich.
a)I like how her mouth looks like a hamburger
b) She's going to give me the sort of nightmares where I wake up crying blood tonight I reckon
c) That's a nice dress 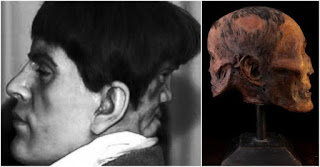 Edward was born with a face on the back of head. The face couldn't eat or speak and they thought it might be blind, but it would sneer and scowl when Edward was happy and would laugh and smile when Edward was sad. Edward asked the doctors to cut the cunt off  because it used to whisper things to him at night that "one would only speak about in hell" but the doctors said they thought it was funny so they wouldn't do it. It would probably be quite annoying having someone strapped to the back of your skull if you liked them, but Edward thought this guy was an absolute fuck lord so he must have found it well annoying.
If you look at the picture you can see that he gave him a little haircut though and he obviously hasn't ever heard of a hat. I'd have grown my hair like Lil Wayne and bought a beanie made out of lead, but perhaps when you have a demon living just behind your own ears, it's best to just meet him halfway for a quiet life.
Anyway Edward begged for them to smash this wanker's face in "lest it whisper to me in the grave" but everyone had become accustomed to the demon now and used to enjoy giving it snouts and flicking monkey nuts into its eyes when Edward was down 'Spoons.
Edward did himself in at the age of 23. The face went on to become Secretery Of State For Education, Michael Gove.
Email ThisBlogThis!Share to TwitterShare to FacebookShare to Pinterest
Newer Post Older Post Home